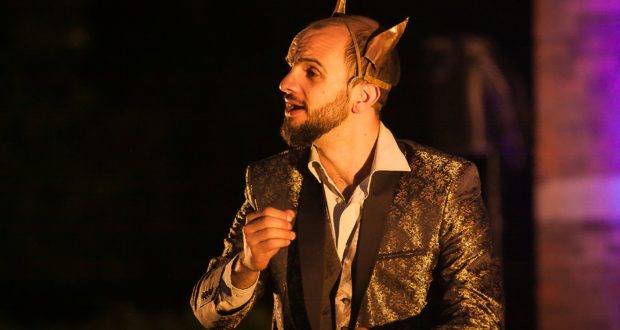 Cons: The performance is quite long and requires some serious stamina.
A Midsummer Night’s Dream, Omnibus Theatre – Review

Pros: Imaginative, energetic and really entertaining. Cons: The performance is quite long and requires some serious stamina. The other night I had a funny dream. Accompanied by three other people, I was exploring the streets of Clapham Old Town, visiting estate agents, entering empty Italian cafes and interacting with some odd individuals. I had headed to Clapham Common to attend a performance of William Shakespeare's A Midsummer Night's Dream but, instead of the theatre's address, I was told to wait at a secret location, where I met my companions. Whilst we were still introducing ourselves, a man approached and&hellip;

User Rating: Be the first one !
The other night I had a funny dream. Accompanied by three other people, I was exploring the streets of Clapham Old Town, visiting estate agents, entering empty Italian cafes and interacting with some odd individuals. I had headed to Clapham Common to attend a performance of William Shakespeare’s A Midsummer Night’s Dream but, instead of the theatre’s address, I was told to wait at a secret location, where I met my companions.

Whilst we were still introducing ourselves, a man approached and put a black briefcase in my hand. Inside, there was an invitation to a wedding, four lilac flower buttonholes and some printed instructions to help us find the venue where the ceremony was about to begin. As we went on, we received more instructions, bumped into some peculiar characters, helped a young girl to elope, sang inside a cupboard, inconspicuously followed a man, climbed windows, learned to blend with the walls and deceive the fairies. The evening was warm, the streets busy and the buildings of the old town looked magical. For two hours we went from place to place, dodging pub punters, using zebra crossings and relentlessly following the instructions delivered to us with the most ingenious devices.

At last we reached the common, where Egeus invited us to join a larger group of people on the lawn, all of them displaying the most diverse buttonholes. Puck was taking pictures of the guests, Lysander  was contending with Demetrius for Helena’s hand, whilst Helena was trying to defend herself from Hermia’s violent accusation that she had stolen Lysander’s love.

Eventually, peace was restored, the catfight settled and we all headed to the Omnibus Theatre, where Patsy Quince, Nick Bottom and Francis Flute enacted ‘the most lamentable comedy and most cruel death of Pyramus and Thisbe’. Lewis Chandler’s lively features and naturally entertaining presence as Flute made the play a pearl of comic genius.

Running for over three hours, without intermission for the first two, the experience was a bit hit and miss, through its ambition to show as much as possible. A little trimming would have gone a long way to improve clarity and engagement, which were otherwise spot on with regards to navigation, cues and imaginative design.

The use of augmented reality and audiovisual psychedelic technologies was extraordinary but, occasionally, unnecessary. Shakespeare’s obscure lines didn’t always benefit from the robotic recorded voices of Titania  and Oberon, and the odd technical glitch could have put at risk the enchantment of my visionary and unforgettable midsummer night’s dream.

Previous: Bringing ‘Kiss Me’ to the West End Stage
Next: Interview: Anna Marsland and David Fairs on ‘I Know You of Old’