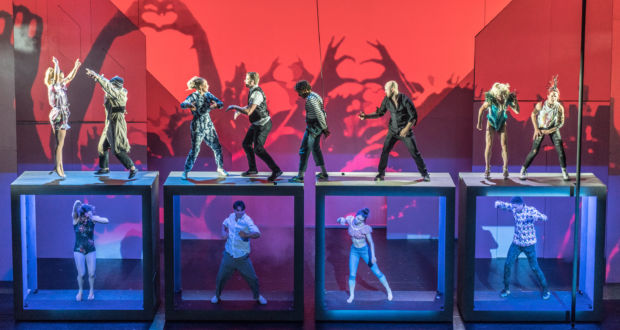 Cons: No story for you to sink your teeth into, and some uneven pacing.
SOHO, Peacock Theatre – Review

Pros: Breathtaking stunts, energetic cast and a belting soundtrack. Cons: No story for you to sink your teeth into, and some uneven pacing. I'll never forget the first time I walked down Old Compton Street. I'd been in London no more than 48 hours, fresh off the boat from South Africa, and had deliberately weaved my way around the streets to this place I'd heard of called Soho. I stood in the middle of it all, snow started to fall and then all of a sudden Kathleen Turner walked into me, apologised and walked off. I knew at that&hellip;

An exhilarating voyeuristic ride into the heart of the capital's most iconic and multi-faceted neighbourhood.

User Rating: Be the first one !
I’ll never forget the first time I walked down Old Compton Street. I’d been in London no more than 48 hours, fresh off the boat from South Africa, and had deliberately weaved my way around the streets to this place I’d heard of called Soho. I stood in the middle of it all, snow started to fall and then all of a sudden Kathleen Turner walked into me, apologised and walked off. I knew at that very moment I had arrived. No matter what decade, I’m sure we all have special memories of this vibrant 24-hour district of Westminster. Stufish’s wonderful Soho, delves into those very memories –  and then some. Like the posters state: ‘SOHO – It’s not just a place, it’s a state of mind . . . ‘

Currently enjoying its world premiere at London’s (often underestimated) Peacock Theatre, Soho is a thrill ride of circus, street and theatre performance that sets out to re-create the exciting, edgy and sinister world of the capital’s infamous seedy neon-lit alleys. The brainchild of entertainment architects Stufish, who are also responsible for the fantastic new Pink Floyd Exhibition Their Mortal Remains at the V&A, Soho is a totally captivating sensory overload. From Madonna to U2 and from Lady Gaga to Queen, Stufish creates cutting edge entertainment for some of the globe’s biggest stars and this extraordinary production ethos really shines with Soho. Everywhere you look there are iconic multi-media projections, moving sets , and a thrilling cast bouncing and flying (yes literally!) through it all.

The show is split into two acts, Day Time and Night Time. During Day Time you see glimpses of all the diverse characters that us Londoners know, love and detest. The packed rush hour tube full of grumpy commuters, the tourist with a map going the wrong way, lads sweating it out in the gym (many of us cheered at the naughtiness of this scene!), prostitutes hanging around Soho square, the Hare Krishnas, and more. Sometimes, the pace during Day Time gets a bit hit and miss, but it picks up after the interval, at Night Time. This is the Soho I cherish: the buzz and sounds of Chinatown, the uninhibited dancing drag queens, the gay boys kissing on dance floors, the disco ball, the forgotten red light district and the after-hours drinking dens. It’s a feast for the retinas seeing all of this performed through soaring aerial acrobats, trapeze and unexpected stunts.

This international cast of 12 dancers and circus artists are sublime and multi-talented on many levels. Direction by Abigail Yeates (also the show’s creator) is tight and beautiful. Yeates asks a lot from her cast, and they rise to the challenge: some of the lovebird duets up on wires and fabric are just breathtaking. Another hero of this show is the soundtrack. From pulsating sounds of the London Underground to contemporary indie, and from the Sex Pistols to 90’s rave, the music throughout the show is varied and fantastic. The only real negative was the lack of a solid story arc across the show. There’s a vague hint at following a newcomer as he explores 24 hours in Soho, but this could have been far better explained: audiences love a protagonist to connect with. But in the moment, as the show flows and the cast members fly, you don’t really notice – you just embrace the rollercoaster ride.

Like the magical square mile itself, Soho is a crazy and raucous night out sprinkled with glamour and a hint of sleaze.