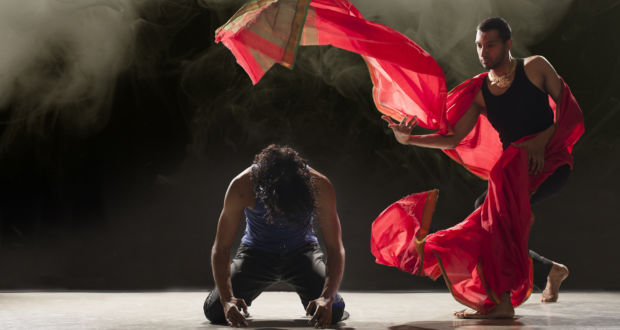 Pros: Dynamic hip hop and virtuoso Indian classical dance onstage together. Cons: Heavy subject matter was matched at times by heavy-footedness. When slavery was outlawed in 1833, plantation owners sought cheap labour from elsewhere. Thousands of young Indians, male and female, were shipped – under false pretences – to the colonies as labourers. This piece is a response to this injustice and its legacy. It features two performers; one trained in classical Indian dance, the other self-taught in hip hop styles. The piece opened with the two dancers bound together in a long piece of fabric, struggling and wrestling&hellip;

Diverse styles of dance unite with a powerful message.

When slavery was outlawed in 1833, plantation owners sought cheap labour from elsewhere. Thousands of young Indians, male and female, were shipped – under false pretences – to the colonies as labourers. This piece is a response to this injustice and its legacy. It features two performers; one trained in classical Indian dance, the other self-taught in hip hop styles. The piece opened with the two dancers bound together in a long piece of fabric, struggling and wrestling to free themselves. Restless, urgent music came from The Smith Quartet, a contemporary string quartet, who played live onstage. From the outset, the contrast between the two dancers was stark. Bharatanatyam, the Indian classical dance form that Jeyasingh herself studied, is highly technical and notorious for the years of gruelling training required to master it. Malaysian-born Sooraj Subramaniam danced this form, and was exquisite to watch. His jumps seemed to hang in the air and his fleet-footed steps were completely silent, except when he was deliberately stamping in perfect time with the music. His poise and grace were all the more apparent when placed in contrast with his partner, Suriname-born Shailesh Bahoran. Shailesh’s repertoire of head spins and arm balances seemed limited alongside the expressive range of Bharatanatyam. Although the contrast was deliberate, the heavy breathing and heavy-footedness of the hip hop and breakdancing didn’t always come off well beside the seemingly effortless Indian dance. There was audible discomfort from the audience during a section where Bahoran repeatedly body-slammed himself noisily into the floor.

There was a lot of variety in this fifty-five minute show, with each dancer taking solos, and the duets ranging in tone from aggressive wrestling and pushing to tender partner work. The long piece of fabric became a river on which the dancers floated and also a screen onto which photos of Indian labourers were projected. In a very stirring section, a voiceover listed the age and cause of death of labourer after labourer as the dancers moved low to the ground with slow and despairing movements. Sound and lighting were well integrated, although I didn’t feel that having the string quartet playing live added anything; they were simply set to the side of the space. The set design was an irregular row of tall poles which seemed at times to represent the masts of a ship, and at others the bars of a prison cell. At one point Bahoran made a series of runs through the bars, only to be pushed back by Subramanian. The hip hop dancer turned each push into a dynamic backwards roll, flipping himself up into a headstand or handstand. It was a satisfying image for the history of hip hop, which evolved from struggle and resistance against oppression. Both dancers traced their heritage back to the Indian migrant labourers. Their dance together embodied both moving forward and looking back without apology.