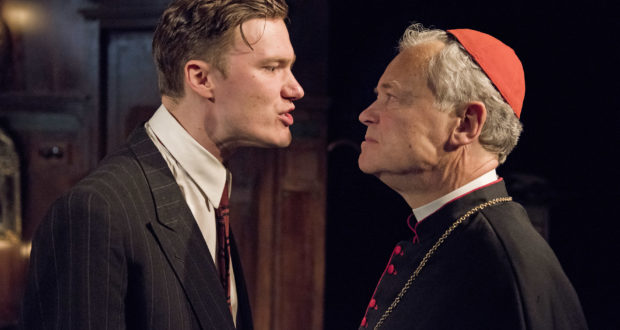 Cons: Needless sound effects and some unwieldy dialogue diminish the overall power of the piece.
All Our Children, Jermyn Street Theatre – Review

Pros: An engaging and meticulously researched script, combined with superb performances, make for a genuinely harrowing story. Cons: Needless sound effects and some unwieldy dialogue diminish the overall power of the piece. To my shame, this was my first visit to the Jermyn Street Theatre. On the strength of this visit, it won’t be my last; the theatre is welcoming, comfortable and damned accessible by public transport. Interestingly, to get to the theatre’s toilets you actually have to go across the stage and through a door on the set! Speaking of set, Simon Higlett’s design strikes you immediately you enter the space. It makes excellent&hellip;

User Rating: Be the first one !
To my shame, this was my first visit to the Jermyn Street Theatre. On the strength of this visit, it won’t be my last; the theatre is welcoming, comfortable and damned accessible by public transport. Interestingly, to get to the theatre’s toilets you actually have to go across the stage and through a door on the set!

Speaking of set, Simon Higlett’s design strikes you immediately you enter the space. It makes excellent use of the compact stage and evokes in great detail a German doctor’s office in World War II. Stephen Unwin’s début play is an historical one, detailing the Nazi euthanasia programme ‘Aktion T4’ (a designation assigned to it after the war), which targeted the severely disabled members of German society. The drama unfolds in the office of Dr Victor Franz, a renowned paediatrician in charge of the Winkelheim Clinic for disabled children. However, it quickly becomes clear that the children at the facility are not there to be cured.

Excellent lighting from Tim Mascall generates a jarringly snug feeling to Higlett’s design, when compared with the bitingly cold winter outside, as suggested by the frosty office window. Unfortunately, the sound effects which permeate the play (slamming doors, a rumbling car engine) are unnecessary, and undermine the realism of the rest of the production.

The opening stages of the play tick along well, though I was slightly put off by the fact that none of the characters seem able to finish their own sentences, yet repeatedly finish those of others. It is true that the horrors of the Nazi régime are sometimes too grim to articulate, but here it feels like the characters just aren’t sure what they are going to say. Still, it doesn’t continue as the play moves forward. Or perhaps it does, but I was so engrossed that I simply stopped noticing.

The arrival at the clinic of Frau Pabst, a mother desperate to see her disabled son, ushers in a more urgent tone. This is intensified by Dr Franz’s realisation that he has already consigned the boy to be euthanised. From this point on the production comes into its own. Unwin’s meticulous research becomes evident as he successfully examines this often overlooked part of the Holocaust, through the lives of four characters all inescapably connected to it. Uniformly strong performances match the power of Unwin’s script, and indeed amplify it; Lucy Speed is devastating as the distraught Frau Pabst, while Colin Tierney’s nuanced portrayal of the troubled Dr Franz shows us a man pushed to his limit. Edward Franklin does very well as his viscous and brutal colleague Eric Schmidt, who represents Nazism’s ugliest face. There is superb work from Rebecca Johnson as Franz’s maid, while David Yelland is commanding in his role as Bishop von Yalen, effortlessly justifying the nickname ‘The Lion of Munster’.

Throughout the second half of the play, the audience is confronted with uncomfortable questions about the treatment of more vulnerable members of society. For a play set before the majority of the audience was even born, All Our Children feels unnervingly relevant, and I found it impossible not to draw parallels between the play’s time and our own. I left the theatre with the feeling I had watched both a harrowing story and a grave warning.