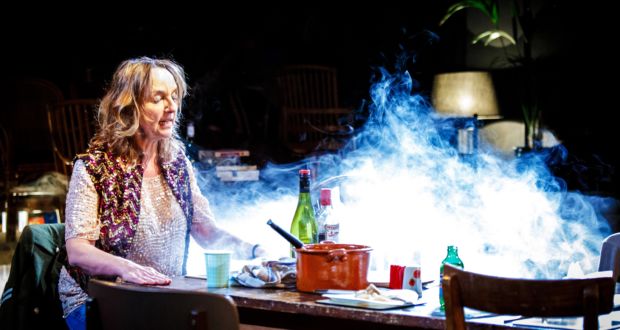 Pros: Features excellent comic timing from a veteran cast. Cons: Character development could be more organic in places. April owns a hotel on the edge of the Somme. Tom is a former soldier who sells battlefield-inspired souvenirs on the side. Pam is from Oswestry. Over the course of a spring evening, the trio discuss love, loss and lamb stew in the dining room of April’s bed and breakfast. Together they prepare for the imminent arrival of a band of young men looking for a place to stay in a show that puts the First World War tourism industry under&hellip;

Spring Offensive is a black comedy that takes a sinister look at the trivialisation of global conflict.

User Rating: 4.45 ( 1 votes)
April owns a hotel on the edge of the Somme. Tom is a former soldier who sells battlefield-inspired souvenirs on the side. Pam is from Oswestry. Over the course of a spring evening, the trio discuss love, loss and lamb stew in the dining room of April’s bed and breakfast. Together they prepare for the imminent arrival of a band of young men looking for a place to stay in a show that puts the First World War tourism industry under the spotlight.

On entering the Omnibus Theatre, an old Victorian library on the edge of Clapham Common, we were greeted by a friendly member of the creative team. Chairs were littered about the performance space, encircling the action played out in the round. Each of the chairs was different which reinforced the setting of a higgledy-piggledy, slightly run-down hotel on the edge of the Somme. The technical setup was well executed – the dimmer switches worked for the various lamps set up across the stage.

The trivialisation of war in the modern era is brilliantly considered in Spring Offensive. At one point, character Tom offered up a selection of souvenirs. These included various trench themed trinkets, one of which was a helmet and metallic poppy connected by a length of barbed wire. This was perhaps one of the best moments of black comedy, something the play promised and delivered on. Other cleverly sourced props included a plotting rod (I had to Google that), the croupier style stick that WW2 military plotters used to move units around the table in the ops room. Tom used it to retrieve the salt on the dining table. There are several excellent black comedy moments scattered around the hour-and-a-bit long performance, perfectly executed by the experienced cast.

Throughout the show there are repeated and timely references to lambs and sheep. A lamb bleats between scene changes, sheep are projected onto the curtain in the closing moments and one evening in the hotel revolves around April’s sumptuous lamb stew. Even the cover of the handout was adorned with a sheep’s head. The theme is well chosen, eluding to everything from biblical references to mindlessly following orders.

Brash, hypocritical and short-sighted April – played by Victoria Willing (who also wrote the piece) – was beautifully written and performed. At one point, April noted that she ‘never thinks about the past’, yet a large portion of her living relies on tourists visiting the Somme. In another moment, her assertion that a conflict of the same scale as the First World War ‘won’t happen again’ makes for an unnerving nod to the current global political climate.

Some of the other character arcs could have been more organic. For instance,at the beginning of the show Maggie Daniels’ character Pam was assertive and then, almost immediately, ceased to be. Likewise Tony Turner’s character Tom experienced revelations that were similarly abrupt. However, this did not detract from the fact that both actors are gifted with excellent comic timing.

The change of tone in Spring Offensive’s closing moments, complete with an army of marching sheep projected across the stage’s back curtain, made for a sinister end to the trio’s exchanges. Spring Offensive offers a haunting look into the commercialisation of a global tragedy in order to make a quick buck.