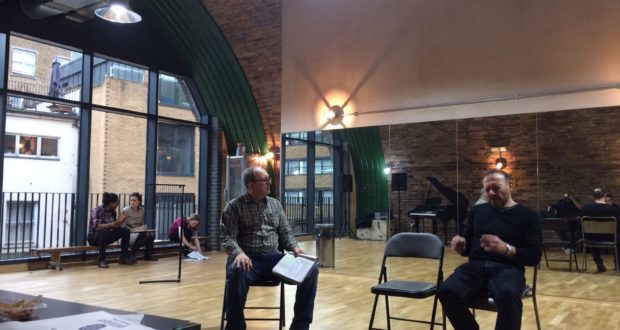 Pros: Clever plotting, some outstanding two-hander scenes, and skillful building of audience tension. Cons: Weak, underwritten minor characters, with some unnecessarily harrowing scenes. Night time. A man, clutching his bloodied abdomen, staggers onto the stage and collapses, frantically calling for an ambulance on his mobile phone: he’s been stabbed, repeatedly, and fears the worst. For most of the rest of the play we see Mark (a strong performance from Craig Karpel) recovering in hospital, attended by his wife, his daughter, and his best friend. The arrival of a police inspector - played with a charming accent by the French&hellip;

An intricate thriller that keeps you guessing – but half an hour too long.

Night time. A man, clutching his bloodied abdomen, staggers onto the stage and collapses, frantically calling for an ambulance on his mobile phone: he’s been stabbed, repeatedly, and fears the worst. For most of the rest of the play we see Mark (a strong performance from Craig Karpel) recovering in hospital, attended by his wife, his daughter, and his best friend.

The arrival of a police inspector – played with a charming accent by the French actor Rosalie Carn – means that Mark has to go over the events of the night in question in rather more detail than he’s comfortable with. “If someone stabbed me repeatedly I’d call them something much worse than a young fellow,” she observes. Was it really a simple case of a carjacking gone wrong? As his story starts to unravel, we glimpse the shocking truth at the heart of the attack, and thereon-in witness Mark’s subtle transformation from genial victim into something altogether more sinister.

Mark’s best friend, Dave, is portrayed in a towering performance by Simon Ryerson. Dave is a hapless, blokey geezer who displays a tormented sense of divided loyalty, and who breaks down as events overwhelm him. The scenes between these two main characters are charged, powerful and emotional, a vivid depiction of two middle-aged men who have been friends since childhood. “You think this is all about you,” says Dave. “It is all about me,” replies Mark glibly.

Both Mark’s daughter (Natalie Mitson) and Dave’s daughter (Charlotte Campbell) add a youthful presence, performing some difficult scenes to strong effect. The other characters, though, are less convincing, and this is largely down to their rather underwritten parts. It’s hard to imagine how Mark’s mousy, downtrodden wife Verity could have been the driving force behind his business success; Inspector Kane’s crude attempts at mock seduction don’t sit with a police officer of her rank. The single scene appearances of a physiotherapist, a private detective and a headmaster introduce too many characters with not enough to do, and a couple of weak performances produce a jarring disconnect.

Despite this, She Wears Scented Rose is a well-plotted, intricate and at times shocking thriller, and the answerphone-triggered denouement is an ingenious and effective device. It was written and directed by Yasir Senna. I rarely think it’s a good idea for a playwright to direct his own work, and this is no exception. Characters got too shouty at moments of tension, when soft speaking would have been much more menacing; and the frequent scene change interruptions, as stage hands moved furniture about, were both unnecessary and distracting.

At well over two hours it’s half an hour too long, and would benefit from some trimming. The grief-stricken scene in a mortuary was harrowing for the audience to the point that many around me couldn’t bring themselves to watch it; and the final off-stage brutality should have been cut altogether, with the play ending immediately before it. Overall this is a cleverly plotted and largely well-scripted play, which would be especially well suited to radio.