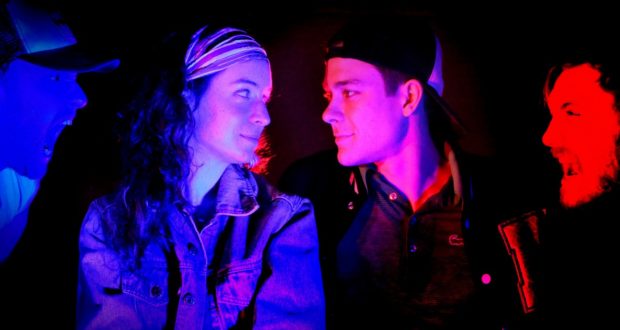 Pros: Energetic, immersive theatre where you get up close with the actors and take part in the action

Cons: An uneasy mix of Shakespeare and rave culture that never quite achieves its goal
Montagues and Capulets, CoLab Theatre -Review

Pros: Energetic, immersive theatre where you get up close with the actors and take part in the action Cons: An uneasy mix of Shakespeare and rave culture that never quite achieves its goal As soon as you enter the abandoned warehouse that is Colab's home, you have to make a choice: do you want to be a Montague, siding with Romeo's family, or will you join Juliet's clan, the Capulets? In this tribal interpretation of Shakespeare's play, the audience are not mere onlookers but active participants, joining in the fight scenes with rubber pipe lagging standing in for swords.&hellip;

Great for under-25 fans of rushing about and 90s rave culture.

As soon as you enter the abandoned warehouse that is Colab’s home, you have to make a choice: do you want to be a Montague, siding with Romeo’s family, or will you join Juliet’s clan, the Capulets? In this tribal interpretation of Shakespeare’s play, the audience are not mere onlookers but active participants, joining in the fight scenes with rubber pipe lagging standing in for swords.

It’s a thoroughly modern adaptation, with lines from the original text liberally sprinkled with expletives. Set in a 1990s warehouse squat, the show highlights how gang rivalry has persisted through the centuries. It’s part Shakespeare, part EastEnders. Juliet delivers her balcony speech smoking a cigarette while leaning on an iron railing, while Father Lawrence wears a cashier’s green eyeshade and distributes simulated acid tabs at the masked ball.

The dialogue consists of about 5% of Shakespeare’s text, interspersed with modern speeches and interjections, and with a few anomalies thrown in – the line ‘We few, we happy few, we band of brothers’, has been lifted from Henry V and given to Juliet’s father. Capulet audience members are urged to join in with the chant ‘What are Montagues? Sh*t! Who’s sh*t? Montagues!’. You can’t help feeling Shakespeare might have phrased it more poetically.

There is a bit of audience interaction in the plot, such as helping Romeo to write a love letter to Juliet, but this is hardly the audience ‘deciding where this story goes’, as promised in the publicity. For the most part the audience activity is restricted to rushing up and down stairs and ladders as the action moves between locations. The fight scene begins with an audience arm wrestling competition; the masked ball, reinterpreted as a rave party, includes a rather bizarre limbo dancing competition, with a lot of hanging about waiting for things to happen.

The venue is splendid – a central hall in which most of the action takes place, with Father Lawrence’s chapel mounted on a platform behind an enormous lit crucifix. Side rooms hold the respective gang headquarters of the two families, which means that depending on which clan you’re affiliated to, you’ll see only Romeo’s or Juliet’s anxiety crises. But throughout it all you’re up close to the action, with the performances taking place among the audience rather than in front of them.

Curiously, and without wishing to give away too much of the plot, this is a version of Romeo and Juliet with an unexpectedly happy ending. The text has been reordered to cope with this significant alteration, ending with a bizarre, modern-language rallying speech by the Prince of Verona, encouraging the audience to fight against the machine rather than each other.

The spirited cast is full of energy, presenting their lines as best they can in the difficult circumstances. Although they’re often hard to hear against the throbbing background soundtrack and the chatter of audience members, who don’t realise a key scene is taking place behind or above them.

It’s an energetic production, with much rushing around and exhortation to fight. But it never quite pulls off the audience participation element, and this is more down to the direction than the individual performances. Fun if you’re under 25 and into rave culture!

Previous: Miss Nightingale, The Vaults – Review
Next: Beyond the Big Top: Contemporary Circus & Compagnie XY’s ‘It’s Not Yet Midnight…’