Cons: Distracting but unavoidable noise from the trains above and an unconvincing love story.
Miss Nightingale, The Vaults – Review

Pros: Strong multi-talented ensemble and great toe tapping songs. Cons: Distracting but unavoidable noise from the trains above and an unconvincing love story. A few days ago I had the pleasure of going on my first Hidden London tour which explored the WWII bunkers hidden beneath Clapham South tube station. I found the dark tunnels and abandoned bunk beds incredibly moving and terrifying, so the timing of seeing this original musical set in the same era was perfect. As soon as I walked into The Vaults and was escorted in darkness towards the distant sounds of classic music hall&hellip;

A fabulous British musical romp that blazes like the Blitz with enough gusto and innuendo to make a Nazi blush!

User Rating: Be the first one !
A few days ago I had the pleasure of going on my first Hidden London tour which explored the WWII bunkers hidden beneath Clapham South tube station. I found the dark tunnels and abandoned bunk beds incredibly moving and terrifying, so the timing of seeing this original musical set in the same era was perfect. As soon as I walked into The Vaults and was escorted in darkness towards the distant sounds of classic music hall numbers, via a variety of WWII propaganda posters, I knew I was in for a treat.

Miss Nightingale is the brainchild of writer and director (and cameo star) Matthew Bugg and it’s a delight. Imagine if you will Cabaret mixed with Boy Meets Boy with a hint of Carry On film and you have a stiff upper lip hit. It’s loud, brash and full of boundless energy, much like the show’s namesake, played to perfection by Tamar Broadbent. It’s a story you’ve seen some incarnation of before: down and out songstress craving fame, a rich closeted club owner who can make it happen, a jealous lover and the poet in-between them all as the spanner in the works. At its heart Miss Nightingale is a beautiful love story between two men living in the shadows.  Bugg’s plot and hard hitting lyrics, especially in the stunning Mister Nightingale and Someone Else’s Song, hint at themes of prejudice, passion and the debauchery of the dark days of WWII.

Broadbent as Nightingale shines as soon as she’s on stage. Her voice is like a well oiled instrument (yes that is a euphemism!) that bellows outs en pointe note after note. It’s delicious. If Sally Bowles had a feisty cousin, Broadbent’s Nightingale would be her. Through her strong characterisation we really get to see the spunky spirit of the Forties and giving Hitler what for! Her rendition of Let Me Play On Your Pipe (oh yes!) and Sausage Song were personal highlights.

Nicholas Coutu-Langmead plays club owner Sir Frank and his star crossed lover, Polish Jewish composer George, is portrayed by Conor O’Kane. Both men are strong, however I found Coutu-Langmead more believable as the handsome war veteran tormented by ‘the enemy within’. O’Kane’s George was too wet behind the ears for me and I didn’t feel the need for the character’s limp wristed swagger. Their vocals, especially the duets and ensemble pieces, were magical. My only issue with Miss Nightingale is that I had no emotional investment in the pair’s love story. It plays out far too quickly and I didn’t feel like enough of a narrative was given to their story arc. I would’ve liked to have seen more drama and dread between the two men to make it more believable.  Similarly some of the scenes with Nightingale and the two men in her life lacked the slow pace and attention I felt they deserved. Niall Kerrigan as the manipulative blackmailing Tom was good and helped add some of that much needed drama.

One thing I couldn’t take my eyes off (apart from Nicholas Coutu-Langmead that is) was the way the company of six all played instruments. So while Tom may have been awaiting his next blackmail cheque, he was drumming the drums and while Miss Nightingale was waiting for her next diamond necklace she was tinkling the ivories. I thought this was a beautiful touch and helped keep the cast tight and focused.

Miss Nightingale might not be for everyone but as we’re on the brink of WWIII why wouldn’t you want to get those toes tapping to feel good songs and watch boys kissing. Ooh matron! 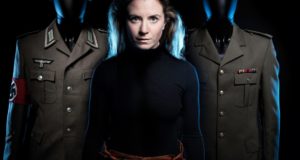