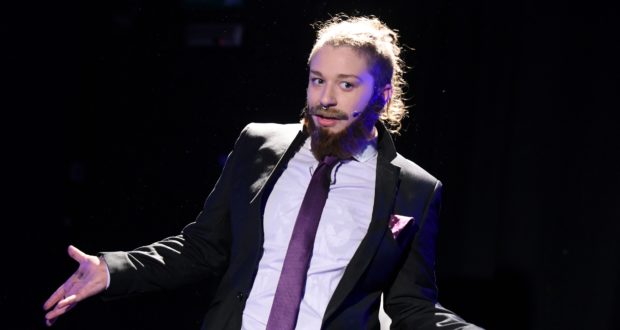 Cons: Not enough drag for me!
Joan, Ovalhouse – Review

Pros: Laugh-out-loud funny, with catchy tunes. An interesting retelling of history. Cons: Not enough drag for me! It’s not very often I come across drag king shows, which is primarily the reason why I was drawn to Joan. For those who don’t know a drag king is (often but not always) a woman who dresses up in masculine clothing to personify gender stereotypes. This approach to a retelling of Joan of Arc’s story seemed to me like a unique way to merge drag, cabaret and history. And I was right! Walking into the impressively large space at Ovalhouse, I saw tables and chairs had been&hellip;

An original spin on cabaret: history told through drag and music.

User Rating: Be the first one !
It’s not very often I come across drag king shows, which is primarily the reason why I was drawn to Joan. For those who don’t know a drag king is (often but not always) a woman who dresses up in masculine clothing to personify gender stereotypes. This approach to a retelling of Joan of Arc’s story seemed to me like a unique way to merge drag, cabaret and history. And I was right!

Walking into the impressively large space at Ovalhouse, I saw tables and chairs had been laid out in-the-round and smoke was slowly filling the room to create a very intimate, speakeasy like space. Instantly I was prepared for a cabaret. Our emcee, Lucy Jane Parkinson, did such a great job at welcoming everyone that I didn’t realise she was actually the performer for the night until she came into the performance space! But the moment Parkinson did come into the round, all eyes were on her. Parkinson’s natural charisma needs to be commended, as does her ability to engage with the audience. Joan was largely entertaining because of the audience interaction. From pantomime style requests such as creating the soundscape of a battlefield to laugh-out-loud moments like Joan (the character now) dragging an audience member on stage to act out a painfully embarrassing love scene, Parkinson was able to bounce off the variety of responses to the act.

The blending of the historical legend with drag however was not what I was expecting. I thought that Parkinson would be dragging it up more often, but actually the only times she seemed to be in drag were for the witty songs pertaining to the characters she became. I was left a little unsatisfied by this, but on the whole the drag itself was not disappointing. Parkinson transformed seamlessly in front of the audience, applying makeup and facial hair quickly, and really demonstrating how fast you can blur the lines of gendered appearance. Also quite creative were the reincarnations of the historical male figures that Parkinson became; while they were all distinct, the men seemed as if they could have been from the present, due to their modern attire. A  lot of credit should go to writer and composer Lucy J Skilbeck and to music arranger David Lewington, who incorporate catchy music varying from jazz to techno.

My only issue with the show was the way it handled the inevitable end of Joan’s story (spoiler: Joan was burned at the stake for continuing to dress as a soldier in 1431). Skilbeck’s way of storytelling is so rich and moving that, aside from the laughs and gags, Joan is a powerful story about being individual and unafraid to stand out. But Joan’s death was catastrophically bleak, not because of the death itself but because of the resolution of another part of the story: Joan’s relationship with omnipresent saint Catherine. Without giving too much away it seems as if Joan is abandoned by Catherine in her hour of need, and after an entire show of encouraging the audience to stand up for themselves I just didn’t feel the ending did justice to this uplifting show.

However I would still definitely recommend Joan to those who enjoy cabaret and are fond of history and escapism. Joan is a one-of-a-kind show, and if it doesn’t make your sides ache with laughter you may want to get your sense of humour checked out.

Previous: How to Succeed in Business Without Really Trying, Wilton’s Music Hall – Review
Next: It’s Not Yet Midnight…, Roundhouse – Review