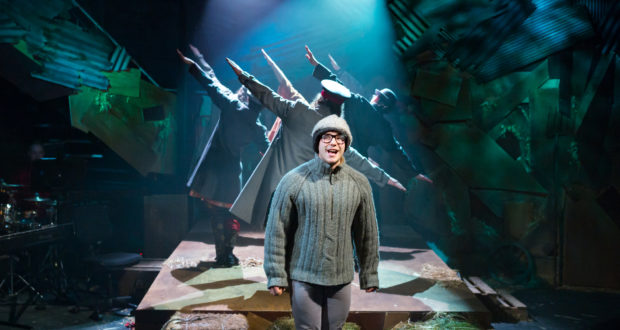 Cons: May be too sophisticated for very young viewers. Front row seating is not super-comfortable.
Honk!, Union Theatre – Review

Pros: Great music and jokes accompany an engaging storyline with compelling characters. Cons: May be too sophisticated for very young viewers. Front row seating is not super-comfortable. Poor Ida. Stuck in a cramped nest with eggs to hatch and a shiftless husband making ‘jokes’ about her enforced idleness. And she’s anxious about that fourth egg. It’s so much bigger than the others. Something can’t be right…. …well of course something isn’t right. Honk! is a musical version of Hans Christian Anderson’s The Ugly Duckling, and what finally emerges from that oversized egg is a great grey fluffy lad who&hellip;

A joyful family musical with a simple aesthetic that cannot disguise its high production values.

Poor Ida. Stuck in a cramped nest with eggs to hatch and a shiftless husband making ‘jokes’ about her enforced idleness. And she’s anxious about that fourth egg. It’s so much bigger than the others. Something can’t be right….

…well of course something isn’t right. Honk! is a musical version of Hans Christian Anderson’s The Ugly Duckling, and what finally emerges from that oversized egg is a great grey fluffy lad who bears no resemblance to his little yellow brothers and sister.

I had remembered The Ugly Duckling as a rather slight tale, but in fact our hero goes on quite a journey before his transformation, meeting a host of animals along the way. Interestingly, for a story which is all about animal identity, this production makes the species of the main characters almost incidental. Director Andy Room has not asked the actors to move like animals, and costume designer Rosemary Elliott-Dancs has not asked them to dress like animals.

With a sleek fur bolero, a woolly scarf or a shiny high-vis jacket, animal identity is hinted at rather than signposted. This allows for some full-on anthropomorphism, with the development of characters that are rounded, recognisable and endearing. First among these is Ellie Nunn’s Ida who starts out as a good-natured, stoical breeder straight out of Call The Midwife. But when her strange new son becomes the object of ridicule she becomes his strong and determined protector. She is every dogged parent who ever fought a Local Authority for a special needs statement, every anguished parent who ever turned around in a supermarket to see a space where there should be a child.

True to its origins, this is a show that knows how to tug the heartstrings, but my goodness it’s far from gloomy! Georges Stiles has written proper toe-tapping music; tunes that stay with you as you walk home. Anthony Drewe has written dense lyrics that are integral to the action and absolutely packed with humour. Many of the jokes will certainly fly over the head of the younger audience members but frankly who cares? There’s plenty else here for children to enjoy, and it’s so refreshing to see a family show that really does entertain all ages without resorting to innuendo or reality TV references.

The cast are all actor-musicians who play as part of an ensemble with the pit musicians, and it’s a rich sound in a relatively small space when the band of eight or nine are playing. There’s witty choreography too, with a fine feline tango, a little music hall number from the bullfrog and a bomber command routine from the geese. Then did I mention the charming puppetry…? Honestly, it’s hard to see how this company could have packed much more entertainment or talent into one show. And whilst it would lose some of its lovely intimacy, it’s not difficult to see this production succeeding on a bigger scale.

If you have, or know, a child with aspirations to treading the boards, then this is a show they should see. Quite apart from being entertaining, warm and funny, its multi-talented cast also offers a salutary reminder of the less glamorous side of a stage career: lots and lots and lots of music practice and never being afraid to perform in a frog raincoat with flippers.