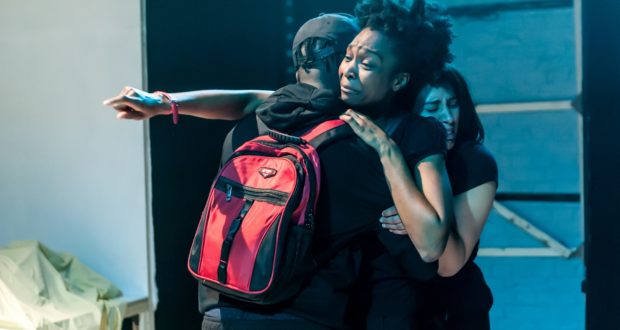 Cons: Some movement elements were not as sharp as they might have been. Arguably unbalanced.
Custody, Ovalhouse – Review

Pros: Excellent performances, staging and script. Hard hitting and evocative. Cons: Some movement elements were not as sharp as they might have been. Arguably unbalanced. I asserted in my last review that five star reviews should be dispensed as if they cost the writer a fingernail. By continuing to send me to see shows with the quality of Custody, Everything Theatre seems determined to end my nail biting days for good. This was my first visit to Ovalhouse, and it is a theatre I am certain to attend again. It lies a cricket ball's throw (even for one of&hellip;

A raw, visceral and, above all, human show. Powerful poetry in play form. Everything theatre should be.

User Rating: Be the first one !
I asserted in my last review that five star reviews should be dispensed as if they cost the writer a fingernail. By continuing to send me to see shows with the quality of Custody, Everything Theatre seems determined to end my nail biting days for good.

This was my first visit to Ovalhouse, and it is a theatre I am certain to attend again. It lies a cricket ball’s throw (even for one of my dubious sporting ability) from the home of Surrey County Cricket Club and appears unassuming. A warm welcome, comfortable open bar area and an excited audience awaited me inside. Filing into the auditorium en route to my cosy seat, the Custody cast inhabited the stage as I passed. Movement and presence designed to make one feel both engaged and uncomfortable. I nudged the person to my right and suggested that this could be good. I was wrong. Custody was fantastic.

The play charts the experiences of a family unit (mother, brother, sister and lover) as they process the news that Brian, a young black man with the world at his feet, has died whilst in police custody. ‘There was a bit of a scuffle and he passed away.’ Each individual member of this social group attempts to accept the death of a loved one in circumstances that suggest neither truth nor justice is being served. The search for peace within, juxtaposed with attempts to process a violent reality. Movement, words, light, sound and stagecraft all serve to present a story that is both real and ethereal. The family, utterly believable as comprehensive individuals, wearing the clothes of metaphor just as easily. The audience is consistently engaged with the characters whilst aware that the issues in play affect a much wider diaspora.

Costumes are simple and effective. Black tinged with red. Faceless and thematic. Hidden in the shadows. Thirsting for vengeance. The staging is simple yet shifting; becoming a kitchen, a morgue, or the site of a nightmare. The presence of Brian haunts the audience. Although never seen he is a constant presence, made flesh by the industry of the actors.

Custody succeeds because every element achieves a high standard. Moreover, the actors are superb. Each inhabits the stage as if born to it. No moment is empty, without truth or interest. We, as an audience feel the weight of their emotions, even as our own perspectives are challenged. The commitment to the role is absolute. So completely did I believe in this ensemble that to praise individuals would be a disservice.

The script is strong. At the risk of invoking hyperbole, not since I first read Brecht have I seen a play written that presents truth like this. It is unapologetic, challenging and utterly self-assured.

The play is not without its flaws. Movement sequences could be tighter. Some may argue that the police are misrepresented. Yet, for a disturbing number of people, Custody reflects their reality. I urge you to take an open mind to Ovalhouse and share it.