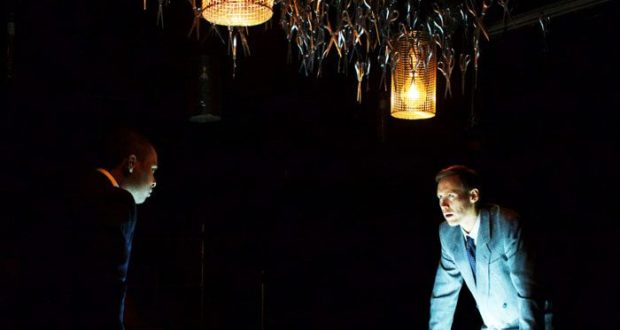 Cons: The venue has character but is too wide for a psychological thriller and too cold for a winter evening.
Normal, Styx Theatre – Review

Pros: Gripping plot, strong acting and beautiful design. Cons: The venue has character but is too wide for a psychological thriller and too cold for a winter evening. Can violence ever be considered normal? Is there a good enough reason to hurt an innocent? Can violence received justify the perpetration of further violence to others? These are some of the questions you might have in mind when you leave the Styx Theatre after watching Normal. This piece, written by Scottish playwright Anthony Neilson, was first performed in 1991 at the Edinburgh Festival and later became a feature film with the title&hellip;

A dramatised and mildly disturbing account of the trial of the Dusseldorf Ripper, which aims to pose a moral question about the normalisation of violence.

User Rating: Be the first one !
Can violence ever be considered normal? Is there a good enough reason to hurt an innocent? Can violence received justify the perpetration of further violence to others? These are some of the questions you might have in mind when you leave the Styx Theatre after watching Normal. This piece, written by Scottish playwright Anthony Neilson, was first performed in 1991 at the Edinburgh Festival and later became a feature film with the title Angels Gone.

We are in 1931 Germany and the lawyer Dr. Justus Wehner (Corey Montague-Sholay) has been assigned his first case: the defence of the serial killer Peter Kurten (Richard Ede), known to the public as the Dusseldorf Ripper. Dr. Wehner, of course, isn’t required to prove the innocence of the accused but to insist on his mental instability and, to do so, he needs to get to know his client in depth. But during a series of face-to-face interviews, the inexperienced advocate will start questioning his own judgement and the fairness of society in attributing penalties. ‘Remember that this man has once been a child’, he urges the jury, entirely intoxicated with Kurten’s charming manners and charismatic personality. The naive twenty-year old and the disenchanted monster, both suspended in a disturbing limbo where the audience will struggle to distinguish fantasies from reality. Between them a name, Eva, and a woman, Peter’s wife Frau Kurten (Cathy Walker).

Neilson charged the representation of the trial with strong symbolism and highlighted the objectification of the body as a political tool, in a Germany where the extremist right wing is taking over power from an octogenarian president. Ground-breaking theatre company RIFT found that the play’s message still resonated in 2017 and have brought us a sleek revival with a strong cast and a visually striking design.

Richard Ede is a mesmerising and petulant serial killer. He exudes confidence and is counter-intuitively attractive, despite his spine-tingling accounts of murder and rape. Corey Montague-Sholay’s main characteristic of vulnerability comes across as natural and easy to relate to. He is the narrator, and his thoughts and feelings guide the audience through the play, establishing an essential empathetic connection. Although Cathy Walker plays a minor character, her role includes some demanding tasks, like lying down on a table centre-stage, under a white sheet, whilst the other two carry out a lengthy and heated conversation above her body.

Linbury prize-winner Grace Smart’s design is simple but effective and ties-in perfectly with Ciarán Cunningham’s beautifully elaborate lighting. Not only the shades and temperature, but also the position of the light sources add significantly to the meaning of this intense psychological thriller where, sooner or later, we’re all called to take sides and decide where justice should point its finger.

It felt like a shame, though, that the Styx auditorium was half empty, as this caused tension to disperse across the space. Blankets were provided, but the wide industrial warehouse – which must be lovely during the summer, with its outdoor bar – was far too cold for a winter evening. This is the first major season produced for Styx by RIFT, a company whose founders Felix Mortimer and Joshua Nawras pride themselves on offering classic stories in unconventional spaces and with boundless solutions. Thanks to their approach, Normal feels like a proper vintage piece with an eye to our modern society. I’d recommend it to those who enjoy a gripping and occasionally gruesome play with an engaging plot.

Previous: Rosalind, The Place – Review
Next: Win tickets to see Miss Nightingale the Musical at The Vaults