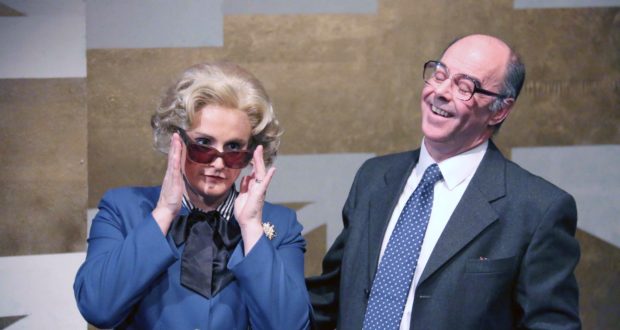 Pros: Funny and moving at times, with nostalgic moments for an older audience. Plenty of talking points.

Pros: Funny and moving at times, with nostalgic moments for an older audience. Plenty of talking points. Cons: Heavy on text, light on action. Younger audience members might not feel engaged. I really like the Brockley Jack Theatre. It’s a warm feeling studio, joined by a short corridor to a friendly pub that does good chips and has cosy arm chairs. The theatre space is just the right size to feel intimate without putting you uncomfortably close to the actors. As soon as I sat down I was struck by the set. The Union Jack was painted in gold&hellip;

A sophisticated piece of theatre, great if you like plays that engage with history and politics.

User Rating: Be the first one !
I really like the Brockley Jack Theatre. It’s a warm feeling studio, joined by a short corridor to a friendly pub that does good chips and has cosy arm chairs. The theatre space is just the right size to feel intimate without putting you uncomfortably close to the actors. As soon as I sat down I was struck by the set. The Union Jack was painted in gold hues onto heavy boards which also functioned as wings. It was stark and imposing, and set the tone well for the themes of power, politics and empire.

This play focuses on the meetings which took place every Tuesday for eleven years between Queen Elizabeth and Margaret Thatcher. It used the clever device of having a younger and older version of both the Queen and Thatcher, each played by two actors. This enabled you to watch the action as it happened at the time, and also to see the characters remembering and reflecting on it as older women. Fiona McGahren played the young Queen ‘Liz’ and Pauline Armour the older ‘Q’. I thought Sarah Tortell as younger ‘Mags’ and Sue Higginson as ‘T’ both inhabited the instantly recognisable voice and physicality of the Iron Lady very well.

I was taken on a journey into the past of British politics, and there were moments when the content went over my head. The biggest laughs came from older members of the audience who were clearly remembering and recognising people and situations they were familiar with. I felt a bit excluded at times, although Howie Ripley and Mark Steere (who each romped through about five demanding character changes with great gusto) did address the audience with some helpful context and background information. The central relationship between the Queen and Thatcher was enjoyable to watch and well imagined; the Queen was portrayed as down-to-earth and humorous, often becoming impatient with Maggie’s excessively formal and composed demeanour. Pauline Armour as the older Queen was wonderful; she looked and sounded like The Queen, and got a great laugh when she leaned in towards the audience and confessed ‘One loves to gossip!’ The play ignored the fourth wall, and performers often addressed the audience directly, which really worked; politicians are often talking to the people after all. After the interval we were invited to be upstanding for her Majesty (I’ll confess I remained resolutely seated!) The Queen also went through the audience shaking hands, which was great fun.

The play seemed to be trying to achieve a lot. It covered the whole of Thatcher’s time as PM, commenting on history and politics, fictionalising relationships between leaders, and also referring with a nod and a wink to the fact it was a play. The six cast members performed with commitment and enthusiasm, but there were a few dodgy accents and stumbles over lines. This wouldn’t have been so noticeable if the play didn’t rely so heavily on text. There wasn’t much action on stage, and at times it felt like watching talking heads. There was no music, and the lighting and set were functional. Nevertheless, I felt a shiver down my spine when I heard the words of history spoken through the actors, and it was a thought-provoking piece, which I liked.