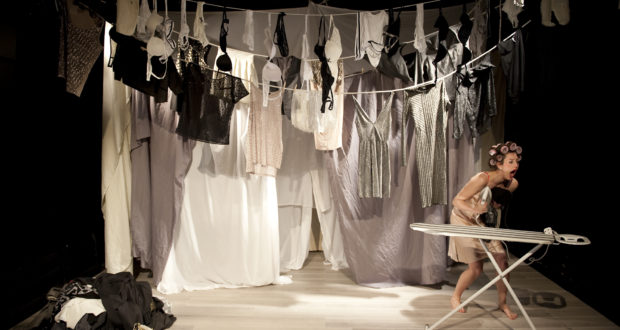 Pros: Comic moments in a one woman show written by Nobel Prize winning playwright, Dario Fo. Cons: Weak production values leave the solo performer struggling. Dario Fo was a joyfully anarchic writer and director. The pieces he wrote (many in collaboration with his wife Franca Rame) continue to be performed widely in Italy and all over the world. He won the Nobel Prize for Literature in 1997.  His most famous play is probably Accidental Death of an Anarchist – based on the true story of a political activist who died in police custody in Milan in 1969. His plays&hellip;

User Rating: Be the first one !
Dario Fo was a joyfully anarchic writer and director. The pieces he wrote (many in collaboration with his wife Franca Rame) continue to be performed widely in Italy and all over the world. He won the Nobel Prize for Literature in 1997.  His most famous play is probably Accidental Death of an Anarchist – based on the true story of a political activist who died in police custody in Milan in 1969. His plays employ the traditional Italian techniques of clowning and Commedia Dell’Arte to make political, satirical theatre which is darkly funny.

Given how much I admire his work, I really wanted to like this production. The Etcetera is above The Oxford Arms in Camden – great location and very easy to find. The pub is a proper Irish pub (they let the Guinness rest), with a warm, friendly atmosphere, even if a little noisy with the sport showing on the televisions. Sadly when my friend and I made our way up to the theatre we were two of only seven people in the audience, which doesn’t always bode well, although I was keeping an open mind. The stage was strung from end to end with washing lines hung with sheets and laundry. You’d be forgiven for thinking it was set in a laundrette – in fact it’s set in an apartment.

Written in 1977, A Woman Alone is essentially a monologue delivered to the audience. After Marina Margarita as Woman burst onto the stage and sang and danced her way over to the ironing board, I’m afraid it took me a little while to realise that the character was supposed to be addressing us, and responding to (unheard) questions or comments we were making. The conceit in the text is that the audience are new neighbours – watching through the window of another flat. However, with no spatial or set referencing for this it was left to Margarita to make this difficult device believable, which frequently fell flat.

Over the course of an hour, Woman tells the story of how she’s been locked indoors by her husband as a punishment for a short-lived affair with a much younger man. She’s also looking after a crying baby, and caring for her wheelchair-bound, sex-pest brother-in-law. She endures a peeping tom in the flat opposite and someone keeps making obscene phone calls to her. Finally ‘The Boy’ (her young lover) arrives to complete the chaos. Theatre about women’s lives has come a long way since 1977 and to me the domestic setting (hair in curlers, house phone) felt dated. I think it would have been possible to bring the setting into the 21st century without losing anything, as the issues of sexual harassment and domestic inequality unfortunately continue to be relevant.

There were some comic moments – Woman’s struggle to say the word ‘orgasm’ elicited a few laughs, and Margarita’s physical comedy and timing occasionally hit its stride – something that I imagine must have been difficult with such a small audience. However, her performance lacked the shading and subtlety required for black comedy and was mostly an assault of breathless high energy gurning and flailing limbs. Overall, I couldn’t help feeling that this production was just not strong enough, and that the challenges and weaknesses in the text hadn’t been sufficiently addressed by the company. A key sound cue was ill-timed, and only at the end did music and lighting support the theatrical moment as Woman took up a strong ending image. I wish there had been more of that all the way through.