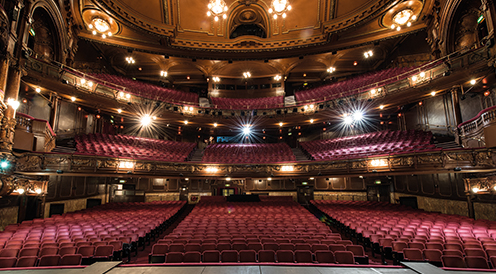 Ten of the most iconic theatres in London – Sponsored

Author: Everything Theatre in Features and Interviews 3 February 2017 0 5,690 Views

The history of London’s theatres is almost the history of London itself, so enmeshed is the West End with the cultural tapestry of the capital. Folklore, tales of catastrophe and the personalities who make their name in the Smoke; all surround the bright lights of theatreland, and every year millions of tourists are entranced by the sweeping architecture and picture book antiquity of London’s glamorous pathway to the stars.

Every name trips off the tongue even if you have never been there. So while we can’t squeeze in such
famous auditoriums as the Barbican, the Gielgud, the Shaftesbury and the Dominion, here are London’s 10 most iconic theatres, in no particular order.

This huge performing arts venue in Covent Garden is home to the Royal Opera and Royal Ballet, and the stunning  building, that dates from 1858, is renowned for hosting truly world class performances.

Situated in East London – or what many people would describe as ‘proper London’ – the Hackney Empire is a throwback to London’s music hall heyday. Legendary names including Stan Laurel and Charlie Chaplin trod these boards, and while a lull in the 1960s and 70s saw it used mainly as a Bingo Hall, an 80s revival sees it today hosting new theatre, variety shows, music, comedy and panto

Moving down to London’s cultural hub on the South Bank, the National Theatre is, in effect, four theatres in one. A range of different auditoriums stage contemporary adaptations of classics, new plays and musicals, while bars and restaurants provide a buzz around the whole complex.

Islington in North London is home to the Sadler’s Wells theatre, which is famous for dance performances on an international scale. Whether it’s contemporary, circus, ballet, Bollywood or family shows, the world of dance has flocked here for many years.

The original Globe theatre was built in 1599 but was destroyed by fire. Its Elizabethan majesty has been faithfully reproduced in this modern reconstruction. The unique open-air auditorium, with upright box-style seating plays host to many of Shakespeare’s classics from May to October each year.

This beautiful period theatre in Waterloo is rich in history and one of the best-loved theatres in London. At 192 years old it has played host to some of the greatest acting talents in the UK, including Laurence Olivier, John Gielgud, Maggie Smith and Peter O’Toole.

We couldn’t leave out the grand exterior and lavish marbled interior of Her Majesty’s Theatre, once the largest theatre in the country. It has always leaned towards opera and as such has been home to Andrew Lloyd-Webber’s Phantom of the Opera for 30 years, since 1986.

Named by many as the oldest theatre in London, although technically the auditorium has been rebuilt several times since its original construction in 1662. The current building on the site in Covent Garden was constructed in 1820, but Theatre Royal Drury Lane has a rich history, and its stage has welcomed performers including Nell Gwynne and Noël Coward.

While this is a small and largely unremarkable theatre on Shaftesbury Avenue, the St Martin’s Theatre demands recognition as an iconic venue primarily because it has hosted over 25,000 performances of Agatha Christie’s murder mystery play The Mousetrap. Opened in 1916, St Martin’s has spent over 40 of its 100 years hosting the world’s longest-running play.

The classic façade of the London Palladium has survived since 1868, and the current impressively-tiered auditorium was built around it in 1910. But the Palladium is world famous thanks to its hosting of the annual Royal Variety Performance, and it became a staple part of British culture in the 1950s and 60s thanks to Sunday Night at the London Palladium. It is staging Cinderella this Christmas and is famous for hosting many of the classic musicals including Joseph and the Amazing Technicolour Dreamcoat and Chitty Chitty Bang Bang.

You can see a full list of London theatre venues here or click here to buy theatre tickets.