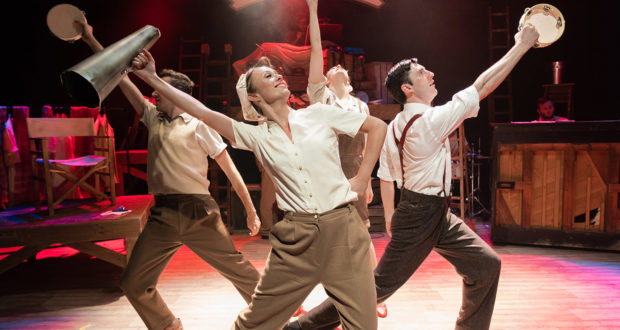 From ‘Somewhere Over the Rainbow’ to ‘Singin’ in the Rain’, some of the greatest moments in movie history can be attributed to MGM musicals. The Hollywood movie studio churned out hundreds of musicals during its Golden Age heyday, including both beloved classics like The Wizard of Oz and lesser-remembered gems like I Love Melvin and Born to Dance. Now, this cinematic ‘Dream Factory’ will come back to life on the London stage in The MGM Story at artsdepot. The musical revue brings the Metro-Goldwyn-Mayer repertoire to life through a selection of songs and stories that trace the iconic studio’s storied history.

Tying the cinematic songs together is a book by writer Chris Burgess, whom we caught up with to learn more about putting this cinematic history on stage.

‘The roaring lion opening every MGM musical promised glamour, magical music, star personalities, Technicolor and an hour and a half of total escapism,’ Burgess said about what initially attracted him to the Golden Age studio. ‘Who wouldn’t be captivated?’

Of course, ‘every MGM musical’ encompasses a vast variety of films with far too many numbers to fit into a single evening. How can one brief show fully capture a history that spans 50 years? But Burgess explains that when narrowing down the repertoire, their decision was made easier by the many ‘iconic moments’ that ‘[they] couldn’t not include’.

‘Who can forget the moment Judy Garland leaves black and white Kansas behind and enters a multi-coloured Oz in Wizard of Oz?,’ Burgess asked. ‘Who doesn’t cry when Garland sings “Have Yourself a Merry Little Christmas” in Meet Me In St Louis?’

Many of MGM’s other iconic moments, meanwhile, have one thing in common: dance. The studio’s stable of stars boasted some of the best dancers in Hollywood, including Gene Kelly, Fred Astaire, Ann Miller, Eleanor Powell and even Bob Fosse — and the studio’s films took advantage of their talent. MGM musicals may be remembered for their bright Technicolor hues and joyous extravagance — but for dance fans, what makes these musicals truly spectacular are their serious treatment of the art form. The studio’s dance sequences brought together crowd-pleasing yet intricate choreography, top-notch dance talent and innovative cinematography techniques to capture some of the best enduring examples of classic musical theatre-style dance.

Whilst many have seen Gene Kelly frolicking in the rain or traversing through French paintings, these dance numbers only scratch the surface. MGM’s treasure trove of dance also includes such choreographic gems as Fred Astaire and Eleanor Powell’s ‘Begin the Beguine‘; ‘From This Moment On‘, the Kiss me Kate number that launched Bob Fosse’s choreography career; and Gene Kelly’s all-dance film Invitation to the Dance — amongst numerous others. These routines continue to inspire long after their creation; their influence is felt in everything from modern music videos to La La Land.

True to its source material, audiences at The MGM Story, Burgess promised, can expect ‘dance, dance, and dance’ from the musical revue. The production’s ‘dazzling’ choreography is provided by Matt Cole, whose past credits include the UK tour of Footloose, Side Show at Southwark Playhouse and serving as associate choreographer of Guys and Dolls on the West End.

‘The show overflows with hectic routines,’ Burgess said about Cole’s choreography. ‘They leave you breathless just watching them.’

The numbers in MGM films, though, are most clearly influenced by their star power. MGM was a studio known for its ‘star system’, and the studio’s films are inextricably linked with the celebrities who brought them to life. So how do you put these iconic numbers on stage without the stars that defined them?

Burgess assured us that this won’t be a problem for The MGM Story, given the talent and dances it boasts. ‘There’s a danger and a physical excitement about seeing great dancers perform in front of your eyes,’ he noted. ‘Our performers in this show are unique in their own right.  They “nod” to the original performers but they truly make these routines and songs their own.’

There may be one original MGM performer that audiences aren’t so familiar with, though. Burgess explained that whilst researching the show, one of the more surprising things he encountered about MGM was the star power of Esther Williams, who made her mark on MGM with her synchronized swimming abilities, starring in such films as Million Dollar Mermaid and Dangerous When Wet.

‘She’s largely forgotten now or mocked, but the biggest star on the lot for years was Esther Williams,’ Burgess explained, ‘who swam through dozens of films and many swimming pools in full make-up for over a decade. She was a huge box office attraction in the forties. Go figure!’

One MGM film Burgess wants audiences to remember, though, is On the Town, a 1949 musical about sailors on leave in New York City starring Gene Kelly and Frank Sinatra. Burgess praised the film, which The MGM Story pays tribute to in its ‘whizz-bang’ first act finale. ‘The score of On the Town makes it is a firework of a film, it fizzes with energy and jazzy syncopation.’ Burgess said. ‘It was new in its day and it doesn’t seem to date.’

Ultimately, the joy and artistry that defines On the Town and MGM’s other musical films is what Burgess hopes audiences will take away from this contemporary musical revue.

‘MGM was a dream factory,’ Burgess said. ‘We want to recreate those dreams and honour the artistry that created them in the first place. Sit back, devour that popcorn and enjoy.’

The MGM Story will play at artsdepot on 23 February. Tickets can be booked here.