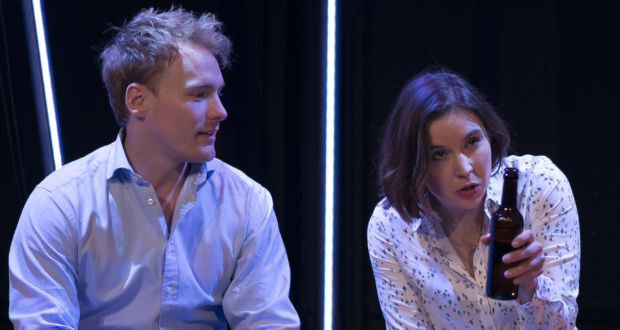 Pros: A strong cast and moments of thought-provoking, clever scriptwriting.

Pros: A strong cast and moments of thought-provoking, clever scriptwriting. Cons: Troublesome pacing and occasional inconsistencies in representing its characters. The Finborough Theatre is quite cosy when it’s full. The space has the typical pub theatre feel, which is lovely, but when it’s at capacity you do feel a little bit like you’re snuggling a stranger! Either way I’m glad there was a good turnout to see Carmen Nasr’s Dubailand, which proved a very thought-provoking piece of theatre about the consequences of building ‘the skyline of your dreams’. The story offers three perspectives. The first is a group of&hellip;

An interesting production punctuated with some impressive character dialogue. Worth seeing but could use some fine-tuning.

User Rating: Be the first one !
The Finborough Theatre is quite cosy when it’s full. The space has the typical pub theatre feel, which is lovely, but when it’s at capacity you do feel a little bit like you’re snuggling a stranger! Either way I’m glad there was a good turnout to see Carmen Nasr’s Dubailand, which proved a very thought-provoking piece of theatre about the consequences of building ‘the skyline of your dreams’. The story offers three perspectives. The first is a group of executives working in Dubai for a construction company, who are depicted as quite morally crooked and unsympathetic to the labour force. The second follows the lives of migrant construction workers who face hard work and far-from-acceptable living and labour conditions. Finally, Clara provides a third perspective: a journalist hell-bent on bringing the truth to light.

Overall, the script had moments of sublime writing, but the pacing of the production was a little jarred. The play jumped sharply between the three perspectives. On one hand this clearly depicted the harsh differences between the characters’ paths of life, but on the other it meant that the play was often quite staccato; you would just be getting into the mood of a scene and then it would end quite abruptly. The cast did well to facilitate smooth set-changes, but even so the play didn’t build a sense of momentum. The plotline has the potential to be something special. Juxtaposing labour workers against the ‘high-flying’ executives was an effective way of showing the obscene contrast in how the cards fall for people depending on their background and privilege. The corporate characters, Deena, Tommie and Jamie, were presented as quite cruel in their attitude towards the labour workers. At times the play had all three characters making equally awful jokes about the migrants, which took away from the individuality of their characters and made them a stereotype. This representation felt a little clumsily constructed, as moments of the script worked well enough on their own to demonstrate that labelling people as ‘good’ and ‘bad’ is problematic. The play’s best moments dealt with the complexities of Dubai’s sociopolitical climates in some really engaging dialogue. The nonchalant delivery of cruel jokes took away from the otherwise delicate handling of this.

The staging was successfully simple. The space was surrounded by strips of neon lighting which cleverly depicted tall skyscrapers and also tied the set to one of the anchoring descriptions of Dubai in the play: ‘the city in the stars’. As is typical for a pub stage, the performance area was small, and the clever lighting added a sense of height to the narrow space. The cast were strong and provided reliable performances; Amar (Adi Chugh) and Clara (Miztli Rose Neville) gave standout ones. Chugh played Amar, a construction worker who sets out to ‘build the future’, with a fine balance of reality and vulnerability, and especially towards the end created some moving moments (there might have been a tear or two). Neville found depth in her portrayal of the journalist, finding all the nuances in the script to create a really well-rounded character. Her relationship with her old friend Jamie (Nicholas Banks) highlighted the best of this, and the two had a great rapport.

Despite its issues, Dubailand is worth seeing for its moments of brilliant writing and the pure strength of the cast. Nasr’s script communicated the fatal costs of trying to create paradise. Her work is clearly created with a nurturing hand, and real concern for the issues she deals with, but perhaps needs a little more development to do it justice.