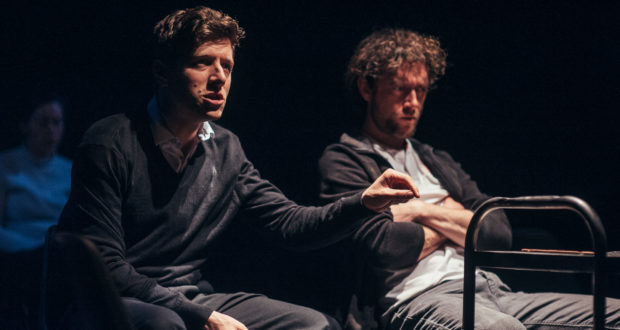 Pros: The fantastic writing is supported by both director and actors, making this compelling viewing from the opening line to the last.

Cons: Whoever introduced double seats to theatre should spend eternity sat in one, with Bernard Manning on one side and Big Daddy on the other. Yes, it is cramped.
BU21, Trafalgar Studios – Review

Pros: The fantastic writing is supported by both director and actors, making this compelling viewing from the opening line to the last. Cons: Whoever introduced double seats to theatre should spend eternity sat in one, with Bernard Manning on one side and Big Daddy on the other. Yes, it is cramped. My love for Theatre503 is well documented, so when a play that started life there received a big transfer to the more upmarket Trafalgar Studios, I had high hopes. Not high enough though, as BU21 managed to surpass them. BU21 follows six complete strangers, connected only by attending&hellip;

The transfer of this play from Theatre503 is well deserved, allowing BU21 to shine even brighter to a whole new audience.

User Rating: Be the first one !
My love for Theatre503 is well documented, so when a play that started life there received a big transfer to the more upmarket Trafalgar Studios, I had high hopes. Not high enough though, as BU21 managed to surpass them.

BU21 follows six complete strangers, connected only by attending a survivors support group. And what are they survivors of? A terrorist attack that sees flight BU21 crash into Fulham. Each has a very different story: lost family, physical injuries or mental scars from what they witnessed. We watch as each takes their place in the spotlight, explaining in their own unique way how the tragedy affected and is still affecting and changing them.

There’s a risk that a show on this topic could be too saccharine, using every cliché in the book to demonstrate the survivors’ misery, hurt and anger. Thankfully long term collaborators, writer Stuart Slade and director Dan Pick, make sure the play never makes you cringe in that way. Rather you cringe at what some might see as highly inappropriate humour. This is done in such a fashion that those brave enough to try and watch such a horrific sounding story unfold are likely not to be easily offended. When one of your lead characters happily boasts about his one night stand on the same night his girlfriend died, you know this is going to go places many similar shows would not dare.

Although BU21 has a cast of six, much of the play is done in monologues, with each separate story slowly joining together. Gradually links form beyond the plane crash. Whilst each character speaks, the other actors perform physically, explaining the need for Jess Tucker Boyd’s credit as Movement Director; Florence Roberts’ emotionally damaged Floss tells how one passenger landed still in his seat in her garden as she looked out the window whilst others lift and move chairs as a way to emphasise the point. It’s simple but it works so well.

What is even more incredible about BU21 is that it doesn’t take you where you might expect. The writing gives you warts and all, doing the unspeakable at times by making you dislike a victim. In fact some are downright obnoxious, none more so than Alexander Forsyth’s brash banker Alex, who storms onto the stage, mocking the audience who he speaks directly to in a very unsettling way, while simultaneously being perhaps the most honest of the six characters. There is one knowing moment when he voices what we’re all thinking about one of his fellow victims, only to be proved completely wrong. It’s an interesting moment, showing clearly how we make judgements based on so little information.

It’s these moments of insight which raise the play up beyond a simple portrayal of victims and terrorists. Rather BU21 questions how we feel about those around us, how no one is simply good or bad and how there are so many shades in-between. Even the obnoxious Alex shows he is not a complete banker at one point. The location of Fulham further challenges our viewpoint, making us consider how we feel differently about disasters depending on where they occur – Fulham, full of rich people, well, not such a loss then.

There is a realness to BU21, even the plane crash is made to feel believable as Graham O’Mara’s Graham explains it with the use of bourbon biscuits, demonstrating how it was all over in 40 seconds. Each character has a depth and a life force that makes you want to know more about them, good or bad. It is not the emotional roller-coaster the story’s concept threatens to be. Instead it is a superbly written and directed study on human life in all its forms, littered with cleverly worded and at times totally inappropriate humour that could have offended were it not so well played.

BU21 reinforces what I already knew: Theatre503 can do no wrong, even when the play isn’t being performed on their hallowed stage.

Previous: Strangers In Between, King’s Head Theatre – Review
Next: Abigail, The Bunker – Review