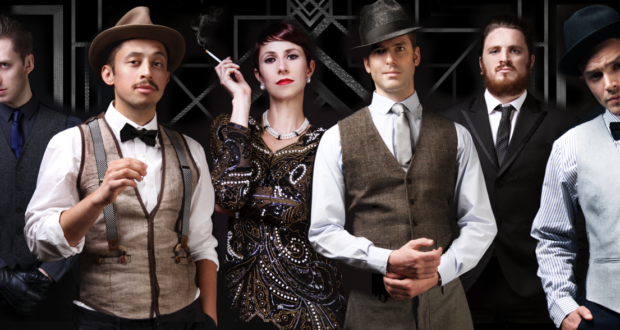 Pros: The acting is great, the venue is great, and pretending you’re a dastardly criminal from the Roaring Twenties is super great.

Pros: The acting is great, the venue is great, and pretending you’re a dastardly criminal from the Roaring Twenties is super great. Cons: A brave attempt at a new method of audience immersion that doesn’t always come off right. Another show, another bar. After a successful debut earlier this year at Paradise by way of Kensal Green, immersive theatre company UnCorked have taken up residency at Evans and Peel Detective Agency for their latest venture, One Nine Two Seven. For those of you not in the know, this is a highly appropriate venue. Evans and Peel is a proper&hellip;

Despite some logistical hiccups, this is a fun and engaging show that’ll keep you guessing to the very end.

Another show, another bar. After a successful debut earlier this year at Paradise by way of Kensal Green, immersive theatre company UnCorked have taken up residency at Evans and Peel Detective Agency for their latest venture, One Nine Two Seven. For those of you not in the know, this is a highly appropriate venue. Evans and Peel is a proper New York underground Prohibition-era boozer (but in Earls Court), and One Nine Two Seven is a proper old school gangster classic (but as modern theatre).

Here, UnCorked deliver immersive theatre with a twist: instead of striking out on your own, the audience is divided into groups. Each group is attached to one of the four criminal masterminds who’ve travelled to Evans and Peel that evening. They’re all there in order to make a deal that will enable them to bring an illegal shipment of booze over from ‘merry old England’, which will, happily, make them all very rich. But, of course, they each have their own secret interests as well…

As is often the case in immersive theatre, the show’s main challenges are of a logistical nature. In terms of atmosphere, Evans and Peel is the perfect venue; in terms of space, it’s just too small to accommodate seventy people moving in four different directions at the same time. Getting around is laborious and time-consuming to such an extent that, on several occasions scenes had to start with only half our group present.

The ‘rules’ of the show were a bit murky as well. Most of the evening was taken up with general scenes, which all four groups see, and private meetings with our criminal overlord (in our case, Tommy ‘The Bandit’). In between we were encouraged to go out on our own, but since this was only for about five minutes at a time, there wasn’t much opportunity to find out any new information and thereby contribute to the story. Of course, immersive theatre is hardly ever actually interactive, but the right concept can still make the audience feel like they can influence the outcome, and that was not the case here.

It was not entirely clear which moments were intended solely for one group and which were fair game either. This confusion reached its climax when some of my team mates forced their way into the gents in the conviction that a secret meeting was taking place, only to severely startle one of the poor actors who was actually just having a wee.

Trying out new ways of involving your audience is a process of trial-and-error though, and One Nine Two Seven does more than make up for its hiccups. The actors really are very good, both in the rehearsed scenes in which they have to convincingly throw out some rather cheesy lines (‘If I wanted to kill you, I would’ve done it already’) and in their improvised interactions with the audience. The focus from all cast members is absolute, although the most impressive performance has to be from the deliciously creepy hit man Leo ‘The Executioner’, the only person who managed to walk around fairly unhindered as the audience would part like the Red Sea under his icy glare.

Other than that, the story is good, the atmosphere is amazing and the whole concept of running around for an evening, pretending to be a twenties gangster, is just a lot of fun. You never know what’s coming next, so UnCorked will definitely keep you on your toes throughout the evening. As tempting as they are, maybe lay off the show-themed cocktails during the performance: you’ll need your wits about you for this one.

Previous: A Christmas Carol, Above the Arts Theatre – Review
Next: Interview: Director Niall Phillips on ‘He(art)’