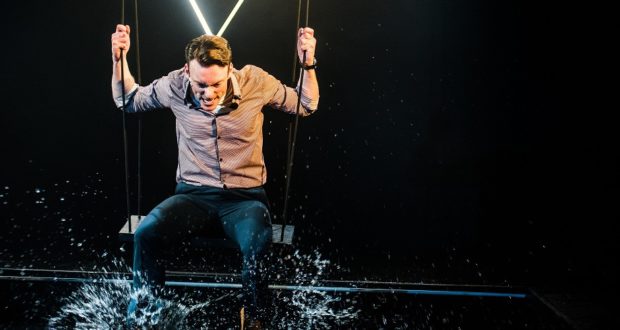 Cons: Not quite brave enough to take its subject seriously
Muted, The Bunker – Review

Pros: Convincing performances and some good songs Cons: Not quite brave enough to take its subject seriously A musical about selective mutism? What an intriguing proposition. As we waited in The Bunker’s well-proportioned space for the show to begin, I noticed the stark black quad of the raised stage, the black swing hanging from the ceiling, and the inverted neon triangle on the back wall. Were we in for a minimalist exploration of how we make meaning of a meaningless world? The lights came down, the music started, the cast appeared and began to perform a repeated sequence of&hellip;

User Rating: Be the first one !
A musical about selective mutism? What an intriguing proposition. As we waited in The Bunker’s well-proportioned space for the show to begin, I noticed the stark black quad of the raised stage, the black swing hanging from the ceiling, and the inverted neon triangle on the back wall. Were we in for a minimalist exploration of how we make meaning of a meaningless world? The lights came down, the music started, the cast appeared and began to perform a repeated sequence of movements with their hands; perhaps the show would view communication through an abstract prism?

Well, no. Muted is at heart a rather conventional musical about a love triangle in which one of the three players happens to be mute. This is Michael (David Leopold), a young ‘rock god’ in the band Lost Boy, who hasn’t spoken since a car crash some years ago. Having dropped him soon after, his ex-girlfriend Lauren (Tori Allen-Martin) is now encouraged to try to bring Michael out of his shell by current lover Jake (Jos Slovick). Jake was also in Lost Boy and although he pretends to be concerned for Michael’s welfare, he’s secretly only interested in reforming the band and having another shot at fame. Will Lauren succeed in finding Michael’s voice? Will old feelings between them be stirred up again?

A younger version of Michael (Edd Campbell Bird) neatly gets around the challenge of having a silent protagonist, and through his bickering with his mother (Helen Hobson) we learn they were at odds over that old ‘university-versus-rock-stardom’ conundrum. There are twists and turns in the story, some substantially more credible than others, with no shortage of action. But the fascinating subject of selective mutism goes almost entirely unaddressed – it’s not much more than a plot convenience, and Michael could just as well be having a massive sulk for all the insight we gain. It feels like a missed opportunity to try something really bold.

The music (mostly piano/guitar balladry with a few up-tempo ‘rockers’) is prettily arranged and there are a few decent tunes, but the lyrics veer between the obscure and the platitudinous: as in the revelation, “It won’t be easy, but nothing worth it ever is”. ‘Just One Look’ is a nicely underplayed duet, and ‘Down Through the Doves’ is an enjoyably doomy anthem, though I first misheard ‘Doves’ as ‘Dust’. I’m not sure which metaphor is more meaningful.

Credit must go to director Jamie Jackson’s attempt to bring some heightened theatricality to the proceedings. I never did figure out what the hand movements meant – and never lost my first impression that the actors were feeling themselves up. I’m quite sure the swing was briefly used as a piano, and what’s not to like about having a splash pool in the middle of your set for some occasional symbolic paddling?

In a likeable cast, David Leopold broods effectively as mute Michael, and Helen Hobson brings experience and conviction to the part of Michael’s mother Amanda. But it’s Tori Allen-Martin who shines. This is Lauren’s story really, and Allen-Martin gives a captivating performance of utter truth, strength and vulnerability. She’s astonishingly expressive, nuanced and complex, with a beautifully tender singing voice. She’s also by far one of the most committed actors of the company, diving right into the splashing and getting convincingly soaked in whatever the water is intended to represent. Allen-Martin’s fine performance is the thing you’ll leave this show talking about.