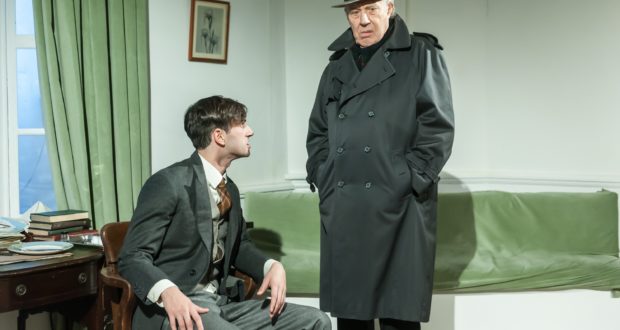 Pros: Wonderful acting from a talented cast. Cons: The script slows a little towards a slightly disappointing end. Do you trust your doctor? Perhaps not if they go by the name of Dr. Angelus. The protagonist of James Bridie's play seems like a charismatic, if slightly eccentric, general practitioner. But this psychological thriller is a story of manipulation, where all is not quite as it seems. Set in Glasgow in 1920, the enigmatic Dr. Angelus has hired a new partner, the young George Johnson. The plot unfolds with various twists and turns and as members of Dr. Angelus' family&hellip;

A gripping black comedy which is funny, frightening and full of surprises.

User Rating: Be the first one !
Do you trust your doctor? Perhaps not if they go by the name of Dr. Angelus. The protagonist of James Bridie’s play seems like a charismatic, if slightly eccentric, general practitioner. But this psychological thriller is a story of manipulation, where all is not quite as it seems. Set in Glasgow in 1920, the enigmatic Dr. Angelus has hired a new partner, the young George Johnson. The plot unfolds with various twists and turns and as members of Dr. Angelus’ family start mysteriously dying, George is naively dragged into the mess, despite strong warnings from outsiders. However, it appears that George might have secrets of his own . . .

Playing at the Finborough Theatre, which has a great adjoining pub, the acting in this drama is truly outstanding. While the characters are engaging, none of them is meant to be particularly likeable, except perhaps the bizarre but philosophical and truthful Sir Gregory Butt, brilliantly portrayed by Malcolm Rennie. David Rintoul plays a wonderfully evil Dr. Angelus. I was completely hooked by his dulcet tones and explosive monologues. He expertly manages to portray many sides to this funny, captivating and manipulative character; in many ways he is the perfect villain! James Bridie might have written this play in the 1940s but Dr. Angelus is a universal, timeless character. His manipulative charm and narcissistic self-delusion still brings to mind many fictional and non-fictional modern criminals. In fact, the whole piece is modern in so many respects that it is the costume design by Tina Torbey that indicates the era more than anything else.

I was extremely impressed by the design of the wonderful set (shared with After October, which is playing concurrently at the venue). The main body of the action happens within Dr. Angelus’ consulting room but it never feels stagnant or constricted. I left with the sense that I had watched the play unfold in many different settings, although it was in fact only ever one set. As I entered the theatre, I was confused as to where I should sit. Benches around the sides seat the audience, but these benches seem like they might be a part of the stage. The set design is very intimate, with the actors sitting in amongst the audience and those on the front row truly feel like a part of the action. In fact, when a fight breaks out between Dr. Angelus and George, they might feel a bit too close to the action. The lighting and sound are also excellent, helping to create different ambiences and adding to the tension, when the play becomes particularly frightening or full of suspense.

The only thing that lets this play down is its ending. The plot races along, building tension and expectation as it goes. Unfortunately, the ending does not quite live up to the excitement of the rest of story. But don’t let that put you off! Dr. Angelus is a very funny play, and also really quite terrifying. In a moment, I went from laughing out loud to wishing I had a sofa to hide behind. I just hope that I never have to encounter such a villainous doctor in real life!

Felicity is a Theology graduate from Manchester University, who has been searching for something meaningful ever since she stopped arguing about the reality of God or the theological roots of anti-Semitism. She has always loved the theatre, from the West End to Broadway and is a sucker for Shakespeare but will never be convinced that Wicked is a winner.