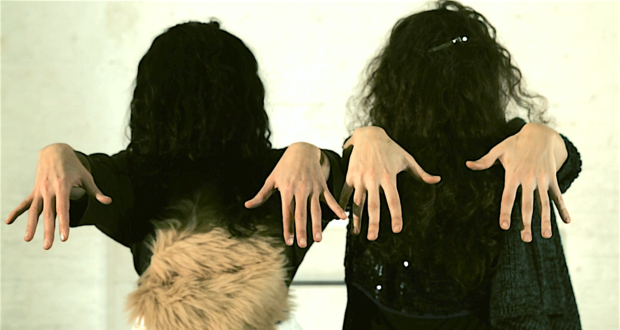 Pros: The performers intend to revive and develop Candid every year, which adds to the show’s value and meaning.

Pros: The performers intend to revive and develop Candid every year, which adds to the show’s value and meaning. Cons: Some technical features, like video projection and sound amplification, need to be optimised. Experimental theatre is a wonderful thing: it’s an artform that can make it very hard to decipher what is happening right in front of you whilst still being entertaining. While I was watching Candid I knew there was an implicit message at the heart of the show and did my best to identify what that message was, but it wasn’t an easy task. Project Candid started&hellip;

An enigmatic performance with a good symbolic rendition of the bumpy friendship between two women.

User Rating: Be the first one !
Experimental theatre is a wonderful thing: it’s an artform that can make it very hard to decipher what is happening right in front of you whilst still being entertaining. While I was watching Candid I knew there was an implicit message at the heart of the show and did my best to identify what that message was, but it wasn’t an easy task.

Project Candid started in 2013 with the aim of repeating and developing the performance every year (or until either of the performers – Tania Batzoglou and Vanio Papadelli – decides to stop). The piece explores the relationship between two women who appear to be really close friends. Upon entering the performance space, the audience were met by Batzoglou and Papadelli, both dressed in silver with their hair plaited together, welcoming the audience in unison.

As the action began I struggled at first to get a grip on it, but an isolated member of the audience was laughing loudly; he obviously saw the fun in it, so I tried harder. It was obvious from the pair’s performance that Batzoglou and Papadelli have an intense and physical relationship. They started by swearing at each other, mainly in Greek, before getting completely undressed. Once naked, they challenged one another to eat the same apple that was hanging from the ceiling. One then slapped the other and they ran offstage to continue their argument. Later, they grabbed two microphones to discuss their mutual dislike and the things that made their friendship miserable. This was one of the most compelling parts of the performance and I could sympathise with what they were saying.

Sadly, it was hard at times to understand what was being said when both performers were speaking at once, due to issues with the acoustics. Likewise, some scenes involved projections being shot onto the floor of the stage which, from a third row seat, were only partially visible and distracted me rather than adding to the performance.

As the two actresses undertook a number of awkward tasks, I felt like a sort of guinea pig and that their actions were, to some extent, aimed at causing and observing reactions in the audience. The rejection of theatrical conventions and the pair’s bold use of body language have a cathartic outcome and I ended up relating both to them and and to the discomfort their relationship caused them. Towards the end of the performance I enjoyed watching the pair spit accusations at one another, especially as this became physical, with the help of some melons and lemons.  Where the narrative went astray, symbolism filled in the gaps and took centre stage.

Admittedly, what kept my attention keen during the self-indulgent quarrels was a morbid curiosity to see what extreme behaviours was coming next. I was also impressed and charmed by the use of simple, inexpensive props – in particular the use of fruit, some covered in gold or silver paint, either hanging from the ceiling or scattered around the space copiously – to great metaphorical effect.

Candid is an interesting and valid concept which is equal parts sociological workshop on friendship and experimental performance art. I would love to see the performance again in a year to see how it develops over time.