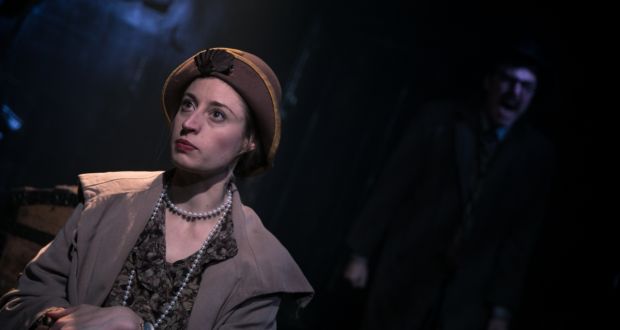 Pros: Amazing special effects and set. The aesthetic of the show was bewitching.

Pros: Amazing special effects and set. The aesthetic of the show was bewitching. Cons: Anticlimactic at times - sometimes the script let the talented actors down. Would you seek shelter in a creepy house with creepy hosts? Probably not, but in the nineteen-twenties, maybe you wouldn't have had any choice in the matter. That is certainly the case in J.B. Priestley’s Benighted. On a dark and stormy night, Margaret and Philip Waverton (Harrie Hayes and Tom Machell) - along with their friend Roger Pendrel (Matt Maltby) - become stranded. They end up asking for refuge in a nearby derelict&hellip;

Perfect for those who want to be transported back in time. You will be kept on the edge of your seat.

User Rating: Be the first one !
Would you seek shelter in a creepy house with creepy hosts? Probably not, but in the nineteen-twenties, maybe you wouldn’t have had any choice in the matter. That is certainly the case in J.B. Priestley’s Benighted. On a dark and stormy night, Margaret and Philip Waverton (Harrie Hayes and Tom Machell) – along with their friend Roger Pendrel (Matt Maltby) – become stranded. They end up asking for refuge in a nearby derelict mansion owned by the sinister siblings Horace and Rebecca Femm (Michael Sadler and Ross Forder). What could possibly go wrong?

The answer is: a lot.

Luckily for viewers however, not a lot went wrong in the show itself. The show’s hauntingly surreal aesthetic was achieved with an impressive Brechtian set. Everything was disfigured and was able to transform into other objects. For instance, the set for the Waverton’s car doubled as a door (strange, I know, but it worked!) Coupled with smoke and sound effects, you just knew you were in for a treat the moment you walked into the theatre.

In fact, the special effects made up for some of the weaker parts of the production. While the cast were incredibly talented, the script let them down occasionally. Maybe it’s because Benighted was originally a novel? Who knows, but sometimes the plot seemed a little anticlimactic and the ending didn’t really leave me with any resounding emotions.

I also thought some moments were quite forced, such as the romance between Roger (Maltby) and Gladys Du Cane (Jessica Bay), who eventually joined the stranded party with her other potential love interest, William Porterhouse (Forder). While their moments together were undeniably cute and the actors certainly had chemistry, I felt the story pushed them too far too soon. It felt more like a plot device than anything realistic. What I would have preferred was to learn more about Cousin Saul (Machell). I won’t reveal much about his character, but for a play which explored the theme of trauma so beautifully I would have loved to have seen more of his character. However, these moments did not take away from the overall enjoyment of the show. The sounds of thunder (and other bumps in the night – no spoilers mind) were so powerful you could feel them as well as hear them.

I would really recommend taking the trip to Angel to see this show at the Old Red Lion Theatre. Not only is Benighted a chilling tale, but the venue is lively and staffed by the most helpful and generous staff I’ve encountered all year. Even if you’re not a fan of horror stories, I would still check Benighted out. The drama was punctuated with great comedy and the overall look of the show is really worth the £19.50 tickets.