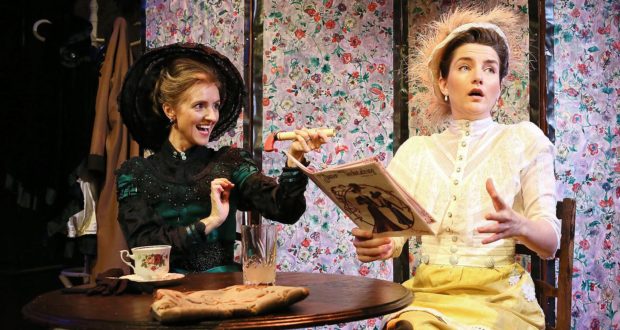 Cons: Do not expect strong women or you will be disappointed.
Strindberg’s Women: ‘The Stronger’ and ‘Storm’, Jermyn Street Theatre – Review

Pros: Very good acting, and the small setting is utilised well. Cons: Do not expect strong women or you will be disappointed. Jermyn Street Theatre is showcasing two short plays from revered Swedish playwright August Strindberg — The Stronger, at just under twenty minutes, and Storm, at approximately an hour — to create Strindberg’s Women, where “love and hate, sex and jealousy do battle”. Perhaps an unusual approach, especially considering the strong female presence in all of Strindberg’s more famous plays such as Miss Julie and Creditors, it nevertheless gives theatregoers a chance to sample his less eminent works,&hellip;

A well-constructed duo, but ultimately let down by lacklustre content.

Jermyn Street Theatre is showcasing two short plays from revered Swedish playwright August Strindberg — The Stronger, at just under twenty minutes, and Storm, at approximately an hour — to create Strindberg’s Women, where “love and hate, sex and jealousy do battle”. Perhaps an unusual approach, especially considering the strong female presence in all of Strindberg’s more famous plays such as Miss Julie and Creditors, it nevertheless gives theatregoers a chance to sample his less eminent works, with Storm having its London premiere.

We the audience are tucked cosily into a turn-of-the-century drawing room complete with Victoriana and delicate chintz with strong echoes of traditional Chekhovian settings, and only a pretty screen and a tea table differentiating the two plays. We begin with The Stronger, which is essentially an entirely one-sided conversation between Madame X (Sara Griffiths) and Mademoiselle Y (Alice Frankham). What starts as a mild-mannered tête-à-tête reminiscent of the beginning of Brief Encounter soon turns around as we follow Madame X through her verbal thought processes. Despite Mademoiselle Y not saying a single word, Madame X comes to realise that the love her husband bears for Mademoiselle Y has resulted in parasitic influences which have seeped into every aspect of Madame X’s married life. Everything from her dress style to her choice of chocolate has been dictated by an almost supernatural sway to copy that of her friend. At first the realisation proves horrifying and treacherous, but as she continues to analyse the situation she reaches the conclusion that she has the better deal after all. She has successfully kept her husband, even if it has cost her her individuality in the process. Sadly I felt there was too much of an emotional distance between subject and audience to feel much at all for Madame X; the fire of her anger was not hot enough, nor the ice of her gaze cold enough. In a way I felt the physical presence of Mademoiselle Y was unnecessary and the play would have worked just as well if Madame X had been addressing the audience directly. However, I felt it was an interesting slant on female competitive nature when it comes to love and relationships, acknowledging its insipidity and underlying passive aggression.

Storm tells of The Gentleman (Paul Herzberg) who has chosen to isolate himself from the world after parting from his wife and child, seemingly on account of his older age. His Brother (Robin Kingsland) despairs after him in such a lonely existence, so when estranged wife Gerda (Sara Griffiths) moves into the flat above with her lover Fischer and encounters betrayal herself, the Brother jumps at the chance to reunite the unhappy and reluctant pair. Yet when the opportunity arises, The Gentleman finds he is emotionally incapable of relinquishing his solitude and rejects her. As time progresses he becomes more and more aggressive, shouting out loudly in fury — which took me by surprise. More surprising, however, is the inclusion of Storm as an example of Strindberg’s Women, since the character of Gerda is rather inactive and not especially distinctive. Though well-acted, again I sensed an emotional distancing which I believe was more down to the writing than the production itself. One cannot always bring life and energy where little exists in the first place. The play depicts the physical storm as bringing no rain, petering out into nothingness, which is evocative of what is happening (or rather not happening) onstage. By no means a bad production, but I expected more from the women in Strindberg’s Women.