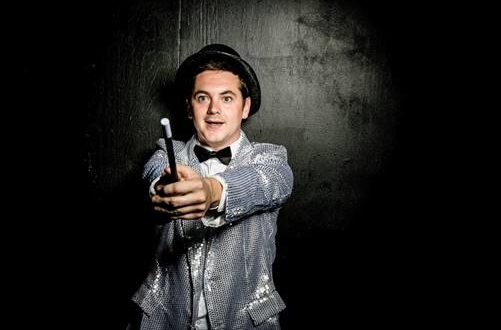 London’s newest theatre, The Bunker, has spent the last fortnight playing host to Tonight with Donny Stixx. The inky-dark comedy by award-winning writer Philip Ridley centres on a boy who wants to be famous, and is directed by David Mercatali and designed (with admirable restraint) by William Reynolds. A hit at Edinburgh last year, producers Metal Rabbit now have a London revival with another slew of rave reviews. Actor Sean Michael Verey, whose performances have been described as ‘virtuosic’, ‘hypnotising’, and ‘fierce’ plays Donny.

One of many astonishing things about the character is that he never, ever stops moving. Dressed in a clean blue t-shirt and jeans at the start of the 80-minute show, he is drenched in sweat by half way through, but continues darting around the stage playing not just Donny, but all of his audiences and family members in turn. I’m pleasantly surprised that Verey has any time at all to spend giving interviews, and jumped at the chance to chat with him about the show, the role, and its reception now the run is well underway.

How does Verey prepare for such a physically demanding role? And is it ever possible to wind down? He admits that the first week is the hardest, ‘almost like going to the gym’. ‘You find yourself occasionally thinking during the day ,“How am I ever going to do it again tonight?”,’ Verey says. ‘But somehow, there you are, there, doing it. And then, you’ve done it! You get into a rhythm.’

After the show ends, however, Verey admits that ‘leaving the character behind’ takes a while. In that ‘come-down’ period ‘you really appreciate people saying nice things after the show but you have to be careful not to seem rude’, he explains. Chatting or taking part in post-show events as himself again, Verey makes clear, is a challenge too: ‘After 75 minutes of hearing your own voice, the last thing you want to do is talk anymore’.

Verey is probably best known for his work on the screen, where he portrayed Jamie Prince in Pramface on BBC 3. So, is it easier to switch on and off in TV roles? Actually, no. ‘In TV you have to find ways to jump in and out of character very quickly, and that’s tiring in itself,’ says Verey. ‘In the theatre, five minutes before the show, I’m in my dressing room and I’m already the character, and I can be him until right at the end of the show.’ He admits that he hasn’t had chance to play someone as extreme as Donny on camera yet though – so can’t compare directly. Perhaps one day!

‘You find yourself occasionally thinking during the day, “How am I ever going to do it again tonight?” But somehow, there you are, there, doing it. And then, you’ve done it! You get into a rhythm.’

It’s not every day you get to perform in a brand new theatre either. Verey was excited from the moment he saw the space, and has said in past interviews how the shape of the space – a thrust stage with the audience raised above the playing space, like a bear pit or a court room – suited the show. Though it’s the amount of space, rather than the shape of it, that Verey says he’s found most exciting, explaining, ‘It’s great not to have to restrict Donny – he’s so energetic that being able to run around and really make the most of some of the gestures … makes everything more visually exciting’.

William Reynolds’ completely bare set and plain costume give space to Ridley’s writing (famously devoid of stage directions and visual cues) and, Verey suggets, ‘allows the audience freedom to imagine things [like Donny’s talent show magician costume] in a much more interesting and specific way’. The audience now feels more settled than when the production first debuted in Edinburgh to exuberant audiences, but reactions haven’t differed drastically – no unexpected laughs or groans from the Bunker’s arty, relatively young audience (on the night I went, at least).

Verey hopes that audiences leave Donny Stixx with moral questions – ‘Should I really be laughing at that? Am I partly to blame for the whole cult of celebrity ‘freak show’ culture?’ – and believes the show resonates even more strongly now than in its first run.

‘It’s more relevant than ever,’ Verey says. ‘You’re looking at a character who is almost from a different world and has all this frustration building up, and you finally see this frustration come to the surface and what effect it has on him, and those around him’.

But this fortuitous timing was a fortunate coincidence for the show, rather than a planned one: the producers had hoped to find a London venue earlier, but a surprise opportunity to stage Radiant Vermin (another Ridley play, also starring Verey) in New York postponed things. Reviews have mentioned the play’s timeliness, but audience feedback is even more pointed – people approach Verey after shows relieved that his character, however shocking, ‘feels the same way: like I’m from an alien planet and I just want to scream’.

‘[Tonight with Donny Stixx] is more relevant than ever. You’re looking at a character who is almost from a different world and has all this frustration building up, and you finally see this frustration come to the surface and what effect it has on him, and those around him’.

Donny Stixx seems a perfect showcase for an actor wanting to branch out into more challenging roles. How has such a challenge, and the positive reception the show has received, affected Verey’s ambitions? ‘Well, ­the reviews have been very kind’, he says (modestly – they’ve been unanimously brilliant) ‘But doing [Radiant Vermin and Donny Stixx] definitely proved something from my point of view – that it was possible to do mould-breaking roles.’ Philip [Ridley] and David [Mercatali], who believed in Verey from the beginning, were excited about surprising people who had only seen Verey in his TV roles, and Verey notes that he has ‘learned so much from the challenges I’ve faced in both Donny Stixx and in Radiant Vermin’.

So, is Verey more confident now? ‘Yes – at the moment there’s a nice feeling when I read a new script that if I can do [Donny Stixx] then I can do pretty much anything.’ But he doesn’t expect that feeling to last forever, and Verey seems excited about what new challenges the future might bring.

Outside of Donny Stixx, Verey also serves as the principal of a brand-new branch of The Pauline Quirke Academy of Performing Arts in Bow, a weekend drama school franchise for children who want to perform. How did that come about? Partly by example – Verey’s parents ran the Bristol branch for a decade, he explains – and also by happy coincidence. Verey had worked with Quirke herself on the sitcom Birds of a Feather, and in a quiet work period after moving to East London last year, it felt quite natural to ‘start talking to a few people’ about bringing the Academy to Bow. Verey enjoys it: ‘It’s been open 4 or 5 weeks now and it’s going really well so far’, he explains. For the last few Saturdays (and the next few) he’ll teach a master class at the Academy on a Saturday morning, before heading into town for a two-show Donny Stixx marathon. As we ring off, he sounds energised, looking forward to another night at the Bunker. I wish him well!

Tonight with Donny Stixx is currently playing at The Bunker through 3 December. Tickets can be purchased here.

Previous: Still, Ovalhouse – Review
Next: Before It Starts, Mirth Marvel and Maud – Review