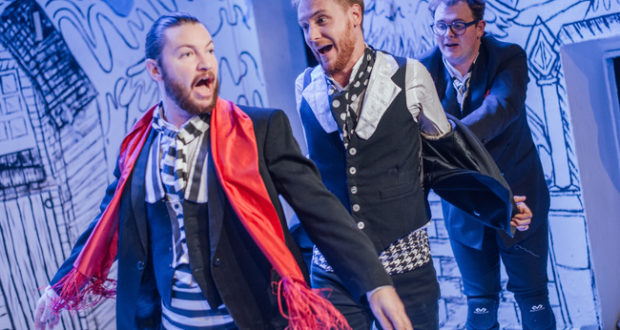 Pros: This funny and clever pantomime is ideal for adults and children alike.

Cons: There just wasn’t enough of the giant lobster.
Scrooge And The Seven Dwarves, Theatre503 – Review

Pros: This funny and clever pantomime is ideal for adults and children alike. Cons: There just wasn't enough of the giant lobster. The reason I return again and again to Theatre503 is simple, they constantly produce the most modern, thought provoking theatre around, pushing the boundaries of what can be done in a small space on a minimal budget. It was therefore strange to be heading over Albert Bridge towards the venue knowing it was not for some modern classic, but rather a pantomime. I’ll admit I was worried it would tarnish my views of this amazing theatre. Of&hellip;

A pantomime that will appeal to everyone, even those who are not convinced by the genre.

User Rating: 4.85 ( 1 votes)
The reason I return again and again to Theatre503 is simple, they constantly produce the most modern, thought provoking theatre around, pushing the boundaries of what can be done in a small space on a minimal budget. It was therefore strange to be heading over Albert Bridge towards the venue knowing it was not for some modern classic, but rather a pantomime. I’ll admit I was worried it would tarnish my views of this amazing theatre.

Of course I should have never been concerned. This is, after all, Theatre503. When they say pantomime, they mean the comedy trio, Sleeping Trees’ production of the not-so-well-known classic, Scrooge And The Seven Dwarves. What do you mean you’ve never heard of it? Interestingly, the title is deceiving as it is not just an amalgamation of A Christmas Carol and Snow White & The Seven Dwarves but a mash up of several fairy tales.

Just to give you an idea of the story, here is a brief synopsis (deep breath now) . . . the Wicked Witch steals all the Christmas spirit Santa has collected, meaning he can’t deliver his presents and his only hope is to extract the last remaining spirit in the world, which is contained deep in Scrooge’s heart. To get this last piece of spirit Santa’s mother transports Scrooge to Fairytale Land, where he meets Snow White, who is looking for her seven dwarves and they all head along the Yellow Brick Road to find the Wizard of Aus (yes Aus, not Oz) . . .

Perhaps it is impossible to convey the complexity of the storyline – trust me, that isn’t even the half of it. There is more, so much more, including an elusive giant lobster . . .

What makes Scrooge And The Seven Dwarves so good is the craftsmanship of the team behind it. They create a play that sits perfectly between the traditional children’s Christmas panto and a more adult version. There is incredible skill in producing something that on the surface is childish and seemingly too simplistic for a venue such as Theatre503, but then turning that into a piece of theatre that appeals to the very audience that would normally be here to witness something more modern. Whereas adult pantomimes rely on innuendo and raucous adult participation, the Sleeping Trees’ production is much more subtle. They rely on clever writing and stagemanship to draw out the laughs; at one point two of the actors manage to play all seven dwarves at once. It is amazing that they can keep up with who is who and who is standing where.

Scrooge And The Seven Dwarves contains enough for both adults and children to enjoy, and never insults the intelligence of either section of audience. Even at tonight’s performance, with just a handful of children, the audience was quickly drawn into the true essence of pantomime, joining in with the classic chants of “behind you” and with some more obscure ones, such as, “we want the lobster”.

Having approached this production with concern, I left smiling and eager to know what the Sleeping Trees have planned for next year, when I will most certainly be back for more of their superb work.