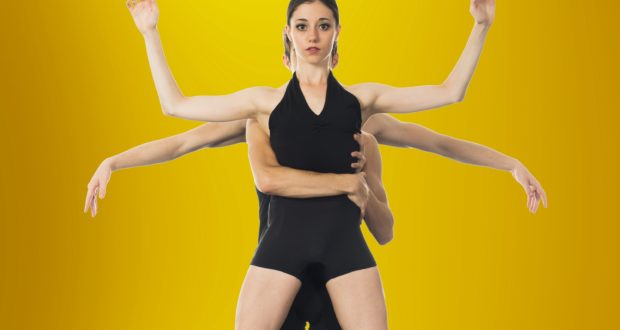 Cons: Sometimes felt more like a PR stunt than it should have done
Quint-Essential, Peacock Theatre – Review

Pros: Striking design, beautiful dancing and a focus on building new audiences Cons: Sometimes felt more like a PR stunt than it should have done The New English Ballet Theatre is a young 'neoclassical' ballet company whose (admirable) mission is to  create opportunities for excellence across the creative spectrum of dance. Everyone is an impeccably trained dancer. The rest of the team commit earnestly to outreach with a 'Ballet Boot Camp' for bloggers,  music festival gigs and more. Now, Quint-Essential: a showcase of new work by emerging choreographers celebrating the company's 5th birthday. By the time I saw the&hellip;

User Rating: Be the first one !
The New English Ballet Theatre is a young ‘neoclassical’ ballet company whose (admirable) mission is to  create opportunities for excellence across the creative spectrum of dance. Everyone is an impeccably trained dancer. The rest of the team commit earnestly to outreach with a ‘Ballet Boot Camp’ for bloggers,  music festival gigs and more. Now, Quint-Essential: a showcase of new work by emerging choreographers celebrating the company’s 5th birthday. By the time I saw the show, I’d attended one of the company’s rehearsals and tried out some of the moves myself.  But what of the end result?

First on the bill was the beautiful but marginally too long dreamworld of Land of Nod. A woman dressed in a lovely flowing dress (designed by April Dalton) was pushed and pulled by a pair of men in a twilit world. The dream sequences were beguiling and full of the kind of bendy agility that makes children want to be ballerinas. A pleasingly jerky ‘rewind/replay’ feel sometimes entered into the mix, adding a twist to what might have begun to feel a bit saccharine.

For some, it might have been the music (Brahms Cello & Piano Sonata, played live) that made George Willamson’s Strangers a programme stand-out. For others, some lovely choreographic set-pieces for the male dancers. For me, it was Andrew Ellis’ outstanding scenography. Not just pretty, with hundreds of individually lit glass spheres suspended midair, it also managed to mark out character with sophisticated subtlety. Sometimes quite literally, as a flash effect captured a telling moment like a camera. We were told that the piece was about a relationship breakdown, but that story was less interesting than some of the moments – almost tableaux – of purely visual pleasure in a piece heavy with repurposed classical movements.

Before each piece, a short video was played in which the choreographer talked about his or her piece. Informative though they were, they gave the show a documentary feel that made the  event feel even more like an outreach exercise than it was. I caught myself dwelling more on how each piece related to what had been said, than on the pieces themselves.

Just before the interval, Moonshine was my first Kristen McNally piece. Mischievous, funny and oddly moving, this piece set to the Grand Budapest Hotel score gave me, at least, a lot of thinking to do. A  group of stripy pyjamaed supplicants communicated with each other in tiny quick gestures, occasionally raising their arms heavenward in what the programme described as a ‘search for significance’. It was huge fun to watch – but with the loose clothes and the non-ballet gestures, it was ‘contemporary’, right? Well, no.  I came away convinced that the piece was trying to say something – what, I don’t know – about those definitions .

Enticement’s Lure, a story of temptation and desire full of rather obvious iconography, fell a bit flat despite some scintillating dancing.  I got on with the final piece, Daniela Cardim’s Vertex much better though; perhaps more because of the Modernist-looking pink-striped backdrop than the choreography. The costumes’ pattern echoed the backdrop, with the cast dancing in skin tight athletes’ body-stockings.

Other reviews have accused the company of having a cast too dynamic for the choregraphy. But more than once during the show I got the impression that dynamism wasn’t really the point so much as an exploration of the company’s own relationship with classical ballet technique and the extent towhich it can be altered. What is ‘neo-classical’? That exploration is, maybe, as much a part of New English Ballet Theatre’s raison d’etre as the opportunities it creates for new artists.

Booking Until: This show has now ended its run