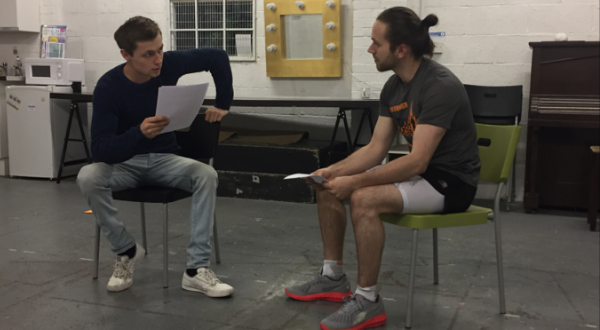 Pros: Some intriguing tales and some memorable performances, with taut writing presenting drama in its most condensed form.

Cons: Not all the pieces are of equal merit.
Spiral, Bread and Roses Theatre – Review

Pros: Some intriguing tales and some memorable performances, with taut writing presenting drama in its most condensed form. Cons: Not all the pieces are of equal merit. If you go to the Edinburgh Festival you might, if you push yourself, fit in seven plays in a day. But to see seven plays in two and a half hours is an altogether more condensed experience. Spiral is the second production by Free Rayne Artists, which was set up to plug ‘a gap in the market for young, driven and ambitious theatre makers who wish to produce innovative and interesting work’.&hellip;

A ragbag assembly of seven short plays results in a genuinely entertaining evening, veering between comedy and pathos while presenting fresh new ideas.

If you go to the Edinburgh Festival you might, if you push yourself, fit in seven plays in a day. But to see seven plays in two and a half hours is an altogether more condensed experience. Spiral is the second production by Free Rayne Artists, which was set up to plug ‘a gap in the market for young, driven and ambitious theatre makers who wish to produce innovative and interesting work’. And there’s plenty of innovative and ambitious work on display here.

First up is Boys and the Baize, which concerns two brothers who are making a film about the first gay snooker player. He not only turns out to be visibly nervous in front of the camera, he also has nothing to say. What’s it like being the first gay snooker player? ‘Yeah. It’s all right.’ Coming out to his family and friends? ‘No big deal.’ But the brothers themselves have unsettled issues.

There but for the Grace of God is an altogether deeper piece, in which a boy and girl rendezvous in church; she gives him a minute to explain himself. ‘You may think that I want to make you squirm, but a part of me just wants to know why you did it’, says Jenny (a nice performance by co-founder Rebecca Rayne). And slowly, the story unfolds: Rob (sensitively played by James Kitchin) raped her in her sleep at a party, simply because he was in love with her. A tender tale, which thoughtfully discusses contemporary issues.

Out of Touch begins with the break-up of the relationship between Tristan and Rich, leaving Rich devastated. But it turns out that this is the story of marathon runner Tristan (‘call me T’), with scenes told backwards through his previous male and female relationships. Cleverly written, it gradually reveals T’s hidden secret, the past making sense of the present by degrees.

When the lights go up on Auntie Alfie, we see Alfie strapped to a chair, hooded by a shopping bag. The bag’s taken off to reveal a grotesque caricature: Alfie is a manic, overwhelming figure wearing a sequinned Union Jack dress, pink sunglasses, and a white fright wig. And frilly knickers. Why does Katy (Rachel Fenwick) keep him around? ‘He’s like this all the time. I don’t know where he gets the energy from. Oh that’s right, he takes it out of me.’ But it turns out that Alfie exists only in Katy’s imagination. In a towering performance of vigour by Adam Parkinson, Alfie grinds Katy down, destroying her job, her love life and her will. A truly remarkable piece by Caitlin Middleton.

Holly (Leanne Pettit) and Martin (Alasdair James McLaughlin) face an imaginary mirror at the start of Buff, preparing themselves for a party. But is Martin preening just a little too much? He reveals that he’s overwhelmed by images of perfect men in newspapers and on billboards. ‘It used to be the Bond girls that would get their boobs out. Now it’s Daniel Craig flashing his tits.’ A neat reversal of contemporary mores, that shows us a mirror view of the problem of expected perfection.

Brought to Mind is the most oblique piece of the night. It features a man in his 40s on a bus, recalling a dream about a boy he’d been in love with in school. But who is the stranger who encroaches on his reverie, teasing out his reminiscences? And does he bear too close a resemblance to the long-dead school friend?

Hospital Chapel 6am introduces us to Davie (a touching performance by Myles Devonté), wracked with anguish, praying for advice. He’s there because his successful older brother Gavin (Andre Skeete) is a doctor at the hospital. But what is it that concerns him so? ‘I keep seeing her face, sliding across the windscreen’, he reveals. And so the story of the hit and run comes out, and with it the truth about Davie and Gavin’s unbalanced relationship. An emotional and moving tale, powerfully told.