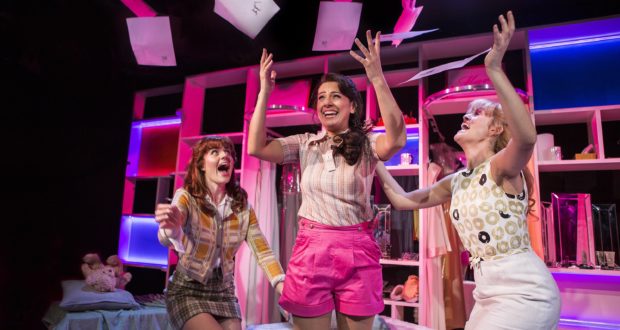 Pros: The story strikes a familiar chord and is delivered wonderfully by all those onstage and off!

Pros: The story strikes a familiar chord and is delivered wonderfully by all those onstage and off! Cons: One or two songs sound too similar. Many know Trafalgar Studios for it's tremendous location in the heart of London and it's impressive upstairs venue- Studio 1. However Studio 2 brings a whole different dynamic to the experience with incredible seating, versatile space and intimacy, being just a few of it's perks. It's compact size means actors are so close you could honestly reach out and touch them (though it's not recommended unless you plan on getting escorted out of the theatre).&hellip;

A hilarious, fun and relatable musical with a strong spirit.

Many know Trafalgar Studios for it’s tremendous location in the heart of London and it’s impressive upstairs venue- Studio 1. However Studio 2 brings a whole different dynamic to the experience with incredible seating, versatile space and intimacy, being just a few of it’s perks. It’s compact size means actors are so close you could honestly reach out and touch them (though it’s not recommended unless you plan on getting escorted out of the theatre). This brings great attention to the intricacy of both the set and the acting.

Vanities: The Musical is set in Texas and follows three best friends over a decade. Battling with the struggles of growing up and growing apart, not to mention the rapidly changing political times, proves difficult for Kathy (Ashleigh Gray), Mary (Lauren Samuels) and Joanne (Lizzy Connolly); though inseparable through high school, cracks begin to appear. Gray does in incredible job at playing strict and organised Kathy and somehow manages to look convincingly both 18 and 30. Samuels gives extremely impressive vocals as Mary and Connolly as Joanne is side-splittingly hilarious. All three women command the stage and give powerful, emotional and most importantly, well-developed performances.

The content of the show is overwhelmingly relatable. We’ve all been through the self-obsessed high school phase where popularity is the only important thing, and we’ve certainly all had the worries and realities of drifting apart from people we considered so important. This show taps directly into that innate fear of growing up and losing our best friends to time and distance, and does so with an incredible score to accompany it. There are strong numbers in this musical, though I only wish the tone was more varied in the music, with some songs sounding too similar which made some numbers a bit ‘samey’. However this doesn’t mean I haven’t listened to the soundtrack on repeat since the show…

Every visual aspect of the musical solidified the time frame. Immediately greeted with an array of pastels in green, yellow and pink and some dated items within the set dressing, we knew this was certainly not 2016 anymore. All set pieces and costumes do wonders in gripping an audience and strongly convincing them that this is the 60’s and 70’s by using everything from the old school radio to the clashing of colours and patterns. An element of the performance that I especially enjoyed was the LED strip lighting in the shelving unit that formed the back wall of the stage, which handily stored props and separated stage entrances. The LED’s colour and intensity is often subtly changed to set mood and back light the actors. This proves a professional and atmospheric touch to the production.

The culmination of an expertely dressed set, catchy music, a funny and convincing script and three extraordinarily talented lead ladies has proved sucessful. I witnessed grown men laughing uncontrollably and children bopping along, proving this musical has a large appeal through genders and generations  and is wonderfully universal. The show is joyous and fun, the staff friendly and the general experience is so worthwhile. Unfortunately Vanities: The Musical only has a month run at Trafalgar Studios so I definitely encourage you to see it while you can!