Cons: Pace is all over the place
Torn Apart (Dissolution), Theatre N16 – Review

Pros: A strong cast and thought provoking premise Cons: Pace is all over the place Discovering yet another new theatre venue in the capital is always such a treat. However when you're a South Londoner the idea of heading to somewhere called TheatreN16 suddenly fills with you dread, as you presume it's in zone 6 north London. Thankfully, and rather randomly, this new creative art space isn't past the wall and is situated in the heart of the glorious Bedford pub in Balham. From all the posters inside the venue it seems this postcode is very much in keeping with the&hellip;

An interesting play that looks at the gut wrenching realities of love, but still needs some fine tuning for Cupid's arrow to hit the spot

User Rating: Be the first one !
Discovering yet another new theatre venue in the capital is always such a treat. However when you’re a South Londoner the idea of heading to somewhere called TheatreN16 suddenly fills with you dread, as you presume it’s in zone 6 north London. Thankfully, and rather randomly, this new creative art space isn’t past the wall and is situated in the heart of the glorious Bedford pub in Balham. From all the posters inside the venue it seems this postcode is very much in keeping with the theatre’s tongue in cheek style, emphasizing that ‘yes we know you are in Balham!’. Billing itself as London’s hottest new creative hub, TheatreN16 is dedicated to promoting a generation of new artists across the range of performing arts disciplines. Great news for budding artists.

As we approached the top of the stairs and collected our press tickets, the posters suddenly changed and warned us that there was nudity, drug taking, smoking and violence in the show we were about to watch. Instantly I was intrigued. I was struck by how intimate this small venue was and equally struck by how intimate the two actors already on stage were being with each other. Torn Apart (Dissolution) is a play of three couples, three time zones and one mattress. We see the relationship between a naive American soldier and a Polish girl fall apart in 1980’s West Berlin, then we witness two lovers struggling with visa woes in 90’s London and finally we watch a same sex couple cope with illness in the present day. All three stories interlink with an overarching theme of the power of love and the immense void and panic one feels if it’s lost. It’s hard hitting stuff and kudos is due to playwright Bj McNeill as the script is strong, with some very powerful and emotional moments delivered by the cast of six. I felt like I was watching The Hours and was almost waiting for Phillip Glass’s stunning score to start playing in parts.

Nastazja Somers and Simon Donohue as the lovers in ’80s West Berlin (the ones getting jiggy on stage when you arrive!) are good. Somers has a beautifully expressive face which worked well for some of her subtle moments staring blankly in the mirror. Donohue is equally good and carries himself well, yet his on and off Yank accent lets him down. Christina Baston and Elliot Rogers as the drug-taking younger generation of star-crossed lovers, struggling under UK visa pressure, are gripping. Both are raw and have a strong presence when on stage together. Sarah Hastings and Monty Leigh as the same sex couple grappling with a recent diagnosis, its impact and aftermath, are superb. Sadly the tenacious cast are let down by the play’s awful pace, which is broken by each couple entering or exiting. Directed by the playwright himself, the play doesn’t flow as easily as the script might allow. Each couple’s story is compelling and I think this would have worked better either as three half-hour plays or with the addition of more scenes where all six lovers are on stage at the same time. Only one group scene was included, but it was gripping.  The additional random bits of physical theatre and dancing didn’t resonate with me, as I felt they detracted from the charged drama.

All in all an interesting play that just needs some fine tuning and tightening to become the stellar production it deserves to be. 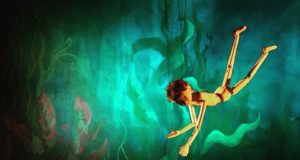