With the Bard’s birthday long past, the excitement about Shakespeare’s 400th anniversary this year seems to have calmed down a little bit. The perfect time, then, for someone to take a hard look at our collective fascination with The Complete Works of Will. That someone is storyteller and comedian Robert Crighton, whose new show Undead Bard will be playing at Theatre N16 this October. We caught up with him to talk about bardolatry, Shakespeare tax and, um… William the zombie stand-up comedian.

Can you tell us a bit more about the idea behind Undead Bard, and about the format – a combination of live performances and audio drama?
The show started as a series of ideas I had around four years ago, about the problem of Shakespeare as this huge thing in our culture – that he’s so many things to different people. He’s not just a playwright, but part God, part heritage trust, part conspiracy theory. I started writing plays and performance pieces on each aspect of his afterlife and the final show is the culmination of that. As you can imagine, a lot of material has been created over four years, so some of it didn’t make it into the live show – for example the play Historic Crimes, which is about what society might do if it were revealed that Shakespeare was a sex offender. It’s free to listen online from my website.

Precisely how the live show will fit together is still being worked out in rehearsal – I’ve three or four overlapping pieces in the show at this moment, from a mock lecture to Shakespeare as zombie stand-up.

Why do you think people are so obsessed with Shakespeare?
Well, firstly, because he was very good at his job. I’m not knocking his achievement as a playwright, though his is a more patchy career than some bardolators would have you believe. I can also appreciate that there are a lot of people who genuinely, and legitimately, can’t stand his work. Those who love Shakespeare, as creators and viewers, do so because the texts are very dense with metaphor and simile, and that’s really interesting to play with. But it is also a huge turn off for people who like to hear characters get to the point.

Secondly, it’s an industry, and an industry that feeds off itself and needs to keep growing. It took hundreds of years for this industry to grow, but once Shakespeare’s plays and words became central to not just our theatre industry but to our language itself, he became omnipresent – you can’t get away from him.

Do you believe it’s a good thing we keep reviving and reimagining his plays, or is it time for something new already?
Every year or so, someone suggests banning Shakespeare, so that we can focus on something new. Beyond being impossible, it’s the wrong issue. The problem with Shakespeare isn’t that people stage his plays, or how they do it. The problem is that so many people do it, and do all the time, and – more problematic, perhaps – audiences keep coming. Since audiences will come to a Shakespeare play, theatres will keep staging his work as a safe bet: his plays make money. If that money is re-invested in other work, then fine, but I suspect a lot of it doesn’t.

So, why do people keep coming? Because Shakespeare is the ultimate expression of our love of nostalgia. His is a safe product to dip into. New writing is dangerous and uncertain in quality, so a revival, a revival of a play by cultural centrepiece that is Shakespeare, wins every time. I once suggested, half jokingly, that the government should re-copyright Shakespeare in Britain, and that all rights payments go to fund new writing. A light Shakespeare tax might rebalance the scales a bit.

You’ve worked on this show for four years. How does it feel to finally put something that’s been knocking around in your head for so long in front of an audience?
It’s not a problem putting on something that’s been pootling about in my head for years – most plays or shows get that. It’s actually the parts of the show that keep getting staged that are the nightmare! The first piece I wrote for the show, The Shakespeare Delusion, has been rewritten (in full or in part) about eight times over four years. I’m fighting memories of the first version, changes in tense, random jokes that flopped and got cut, but which I’m half tempted to try just one more time to see if it’ll get a laugh. That’s why the show is a mix-up of old and new works, because the new has less baggage.

How would you feel about people still performing, and reinterpreting, your own shows in 400 years?
I’d be very surprised and I doubt many would survive the shift in culture that time affords. Shakespeare was clever and lucky in largely writing plays set in other times or places to his own – so they weren’t loaded with as many contemporary references that we, 400 years later, wouldn’t get.

The only thing I’d fear, especially having looked at Shakespeare for so long, is reverence. Sometimes people are too reverent to the text of Shakespeare, where a judicial cut (or dare I say, cuts) would be welcome.

I’ve been on the receiving end of this once, actually! There was a revival of one of my monologues a few years ago and I went to watch a rehearsal. The performer was very respectful of my text, which was a problem when it came to the typo in the script, which was duly reproduced with some effort made to make it make some sort of sense. I felt bad pointing out that it might be easier if they just changed the word to what it obviously should be.

Finally, who should come and see Undead Bard? Is it one for the avid Shakespeare fan, or would it be better for them to stay home?
All comers are welcome!  It’s most definitely for both the fan and the uncommitted – while there are jokes and moments that the fan might recognise, there’s nothing in the show that requires expert knowledge of Shakespeare. It’s about how people view the man and his life in our culture, not about rootling around a particular play. 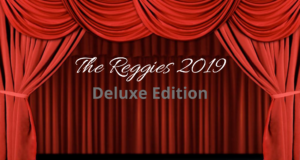