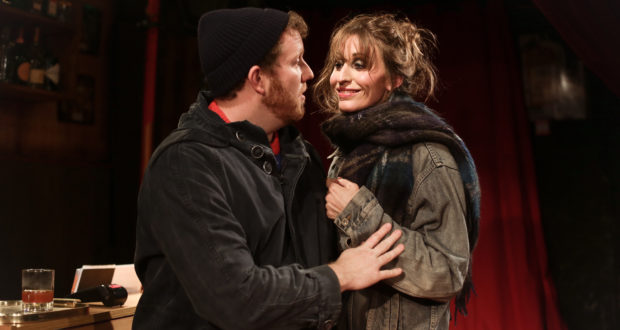 Pros: A talented cast that fearlessly embrace the self-conscious humour of the libretto.

Pros: A talented cast that fearlessly embrace the self-conscious humour of the libretto. Cons: The very warm theatre left me panting for ice cream at the interval. That’s commercial acumen for you. Intimately staged opera offers a similar unique value to cinema screenings from the biggest producing opera houses across the globe. In an auditorium of over 2000 audience members even those in the priciest of stalls seats have an orchestra to contend with between themselves and the performers. From my seat in the King’s Head Theatre I was an arm’s length away from the four singers who carried&hellip;

Humour outweighs tragedy in this enjoyable new version of a classic romantic opera that takes audience participation to the next level.

Intimately staged opera offers a similar unique value to cinema screenings from the biggest producing opera houses across the globe. In an auditorium of over 2000 audience members even those in the priciest of stalls seats have an orchestra to contend with between themselves and the performers. From my seat in the King’s Head Theatre I was an arm’s length away from the four singers who carried this production. I saw their facial expressions, heard their intakes of breath, and I also saw clearly the faces of the audience. This production purposefully shines a light on both the stage and its audience, to great comic value. At one point I thought the interaction may have overstepped the boundary of good taste, but generally it came off as spontaneous and funny. If you can see the people in the front row you may as well use them. Free labour.

This new version of La Bohème by Adam Spreadbury-Maher transforms its female protagonist Mimi into a drug addict. From my perspective this modernisation really works, as the self-destructive pursuit of pleasure and escape sits well within the bohemian hedonism that all the characters struggle to maintain without wound. Ralph and his roommate Mark are creatives failing to make the rent or earn an income. Ralph falls for neighbour Mimi (poor thing), and Mark and his coquettish lover Musetta are on-and-off as Musetta’s desire for material goods and security repeatedly tempts her away.

Becca Marriott is compelling to watch as Mimi; her voice embodies the dramatic themes of Puccini’s music with all the sadness and beauty I’d expect from an operatic rom-com of this stature. Honey Rouhani plays Musetta with a marvellous bolshie confidence. Her lover Mark, played by Thomas Humphreys, is both funny and serious to the exact degree; his tortured love for Musetta is utterly convincing. Matthew Kimble’s Ralph is suitably cheeky, and he and Marriott together are particularly funny in their happier relationship moments. In fact, the entire cast sings Adam Spreadbury-Maher’s libretto, which is for the most part funny, with gusto and sincerity. It pokes fun at itself and the romance, but the execution is unapologetic, so it works.

There wasn’t an empty seat in the house, but unfortunately neither was there any air conditioning. So though the visibility of a closely tucked and engaged crowd felt convivial, and worked wonders for audience participation, the heat and perspiration created an unfortunate contrast to the winter setting of the opera. The cold is so key to the romantic dialogue between Mimi and Ralph, and the season so instrumental in shining a light on the penury of the characters’ bohemian lifestyle, that without it, I wasn’t convinced of their dire straits. And then there are the smart phones; they can’t pay rent or the gas bill, but they’ve got WiFi and £600 phones. Nevertheless, it’s an interesting reflection of modern day priorities and I totally ran with it in action. To summarise this digression, excepting a few choice electric fans that I spotted in the interval, I thought the production could do with a deus ex machina of cold air.

Lighting design is effectively romantic, and in the second half it renders the Mimi and Ralph reconciliation genuinely quite touching. When it comes to the engagement with the audience, the direction is cleverly choreographed, and provides the energy that in a large production you’d typically get from the peripheral chorus and actors. The staging felt a little ineffectual in those scenes where characters are resigned to the sofa; I couldn’t get a good line of sight and performing to the audience looked challenging from amidst the depth of the sofa cushions.

I had a very pleasant evening at the King’s Head Theatre, and I laughed out loud at the audience interaction. A creative and amusing libretto accompanies timelessly beautiful music from Puccini, with a talented and bold cast that I’d be keen to see perform again. Definitely an evening well spent.

Previous: Interview: Bringing ‘Vanities’ to the UK
Next: Spotlight on the ‘Spotlight Challenge’