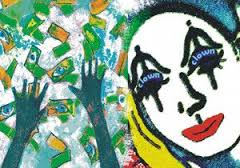 Pros: Great comic moments, and thrilling up-close singing. Cons: Second opera felt a bit stifled in the small studio space. Last time I saw an opera in the Arcola's Grimeborn summer festival, it was in the 200-seater main space. It seemed unlikely that a full-sized opera could even fit into studio 2, which is half the capacity and less than half the size. But that's where Irrational Theatre's double bill of Gianni Schicchi / Pagliacci was programmed. Low-ceilinged studio theatre, packed with audience members, crawling with singers: would we all survive it? I wasn't sure. I've always liked the&hellip;

Fantastic value (if slightly too up-close for some) double bill in London's most exciting opera festival.

Last time I saw an opera in the Arcola’s Grimeborn summer festival, it was in the 200-seater main space. It seemed unlikely that a full-sized opera could even fit into studio 2, which is half the capacity and less than half the size. But that’s where Irrational Theatre’s double bill of Gianni Schicchi / Pagliacci was programmed. Low-ceilinged studio theatre, packed with audience members, crawling with singers: would we all survive it? I wasn’t sure.

I’ve always liked the silly humour of Gianni Schicchi in the original Italian. Translated into English, it’s even funnier. An avaricious family get their just rewards through the cunning acts of a peasant (who happens to have a beautiful daughter). In such close quarters, the acting element is particularly important. I was impressed by how fluently the players navigated the furniture-laden set, and added gestures and mannerisms that enhanced the comedy. Herbie Hill-Reid’s stand-up influenced doddery Doctor (who gets shooed away while the family concoct their money-grabbing plan) and Katy Bingham-Best’s shrill and clownishly bug-eyed Aunt Zita were particular highlights.

It was a stretch for me to believe that the rather makeshift-looking set was supposed to be a mansion, but the stars of the show were completely believable. Ian Henderson’s ‘wide boy’ Gianni Schicchi was irresistible despite looking like an unnerving cross between an Italian boxing coach and a Trump supporter. Ana Bratanic managed to weave one of opera’s most famous arias into a convincing portrayal of Schicchi’s daughter Lauretta, her fairly dark voice a nice foil for her lover Rinuccio’s light and deliberately slightly squeaky tenor. The end of the opera was the end of a fun and high-energy first half, which left the audience buoyant.

The second half of the double bill, Pagliacci, was a darker affair altogether. The stage was barer and less naturalistic, the floor covered in an unsettling jagged pattern. A black-clad chorus filed in and sat down at the back, watching the action like zealous spectators. The story begins innocuously enough. Two members of a troupe of about-to-perform clowns, Nedda and Silvio, are lovers, unbeknownst to Nedda’s husband Canio (Randy Nichol). Until Tonia (a man’s role originally, manfully tackled by Katy Bingham-Best) in revenge for being jilted by Nedda, gives the game away. Unfortunately, the clowns’ play has a plot uncannily similar to what had just gone on: they don’t get far into it before Canio collapses into a murderous rage.

Even with a piano-only accompaniment, it’s an intense experience listening to big voices in full flight in a small space like the Arcola Studio 2. Where that allows you to appreciate detail and theatrical nuance in the performances – as it did in Gianni Schicchi – it can work a treat. But in such a big showpiece as Pagliacci I sort of wished I’d seen the same production at the (slightly bigger, more traditional) Arts Theatre earlier this year. The singers obviously relished singing the Italian libretto, which made for some glorious moments of course. Samantha Green was a pretty and beguiling Nedda, and Herbie Hill-Read a warm and handsome Silvio. But, gorgeous and dramatic though Nichol’s Canio / Pagliacci was, it often felt overpowering to me, especially at the very end of the evening when the room was hot and seats growing uncomfortable.

It’ll take more than a slightly stifled second act to dim my enthusiasm for the mighty Grimeborn. And I’ll look forward to seeing more from Irrational Theatre wherever they pop up next.