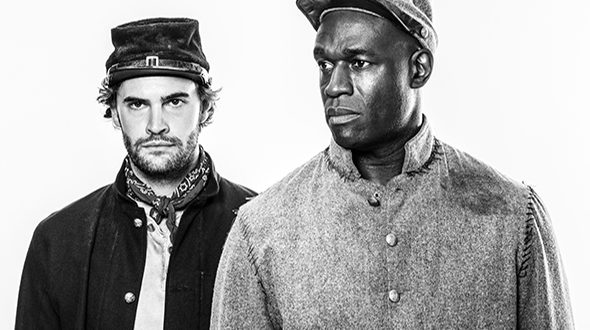 Cons: The final play of the trilogy is more literary than theatrical.
Father Comes Home from the Wars, Royal Court Theatre – Review

Pros: Great performances and inspired writing. Cons: The final play of the trilogy is more literary than theatrical. Seeing a show at the Royal Court is a real night out. Father Comes Home from the Wars – an epic that follows its slave hero (called Hero) into and back from the 1862 American Civil War – got raves for its first run at New York's Public Theater in 2014. The Royal Court run is the play's UK premiere; new cast, same creative team. Seated by London's most impressive front of house team, a bustling house awaited the start of&hellip;

High-stakes games are played for ever-darker laughs in this beautifully written interrogation of morality and American history.

User Rating: Be the first one !
Seeing a show at the Royal Court is a real night out. Father Comes Home from the Wars – an epic that follows its slave hero (called Hero) into and back from the 1862 American Civil War – got raves for its first run at New York’s Public Theater in 2014. The Royal Court run is the play’s UK premiere; new cast, same creative team. Seated by London’s most impressive front of house team, a bustling house awaited the start of the play to strains of blues guitar and banjo by a lone musician on stage: Steve Bargonetti, arranger and musician from the original show.

Song ushers each play in and out, rooting the action in its time and place – an exciting tension with Emilio Sosa’s contemporary-ish costumes, which struggle to universalise things. In play one, Hero (Jimmy Akingbola), a plantation’s finest specimen, is promised his freedom if he’ll fight in the war with ‘Boss Master’, against the abolition of slavery. Will he? Outside a rickety shack, on the dirt-style floor which is part of Neil Patel’s fake-naturalistic set design, Hero’s slave ‘family’ take bets on his decision. Hero’s morals and his wife Penny (Nadine Marshall) say ‘no’. His body – owned by Boss Master – chooses ‘yes’. Completely understandable, until other secrets seep out, disguised as soap-opera melodrama, or sitcom. Then, Hero seems a lot less likeable.

Play two happens in the shadow of Play one’s shack, now suspended in mid-air: Hero, Master (now Colonel) and Yankee prisoner Smith rest near the battlefield. John Stahl plays the unpredictable Master with admirable nuance. He’s on the wrong side, but he’s the only one with nothing to hide: we find out Smith has a dirty secret, and then Hero starts questioning the very value of the freedom he is striving for. Like the hanging slave shack, unanswerable questions cast shadows on Hero’s character. But, how can you condemn someone for morals they don’t own? What is okay to sacrifice for the ersatz promise of freedom – if you believe you are worth more as a slave?

Like in any self-respecting epic – Homer or otherwise – high-stakes games litter the plays. Play one: the unwinnable bet. Play two: a horrible game to guess Hero’s market value. In play three, a raggedy chorus takes it in turns with a deliciously surreal talking dog (named Odyssey, obviously) to play cryptic word-games anticipating Hero’s not-so-glorious return. I love epic plays, but this final one was more enjoyable to read than to watch – as was the Jerry Springer-style melodrama that ended the final play. But perhaps I was just losing concentration; I’d been in my seat for almost three hours by then.

By the end of the final play, Hero’s moral character has been almost completely undermined. As Hero – no longer a hero – exits the stage via a two-dimensional-looking walkway that spans the back of the stage, the characters themselves fade. But the unanswerable questions remain, hanging above our heads, like the slave shack, and the last musical refrain.

It is indeed an ‘unfashionably’ (Guardian) long evening. People, myself included, got restless waiting for the end. So it is in the play: waiting to go to war, waiting for freedom, waiting for Hero’s return. But, once the waiting is over, the longed-for result isn’t as welcome as expected. Despite some uneven pacing in play three (too much Dog), I didn’t want it to end. And the feeling only intensified: like an earthquake, the ripples of the play’s power didn’t get big enough to really notice until hours later. I won’t think of morality in the same way again.