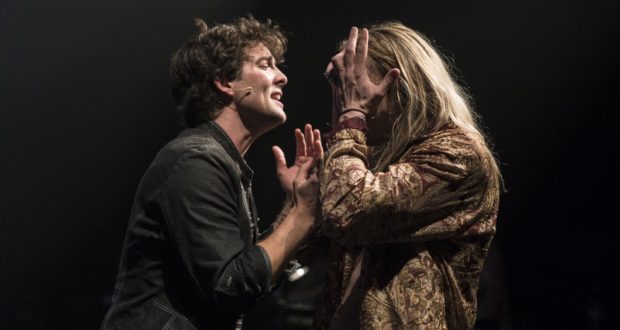 Pros: A new and exciting musical with a choreography that’s fit to win awards.

Cons: Some elements of the production need developing and refining.
27, The Cockpit  – Review

Pros: A new and exciting musical with a choreography that’s fit to win awards.   Cons: Some elements of the production need developing and refining. 27 is a dark and alluring tale, blurring the lines of fantasy and reality. Drawing strong inspiration from Greek mythology, we're delivered a twisted fable of fame and the price it comes at, as our protagonist Orpheus (Greg Oliver) devolves from a passionate musician into a unstable addict. At it's rock and roll heart, 27 is primarily about love and loss. These two human values have been explored throughout theatre history, yet it is the&hellip;

A new kind of theatre that brings depth and emotion without losing any power.

User Rating: 4.13 ( 2 votes)
27 is a dark and alluring tale, blurring the lines of fantasy and reality. Drawing strong inspiration from Greek mythology, we’re delivered a twisted fable of fame and the price it comes at, as our protagonist Orpheus (Greg Oliver) devolves from a passionate musician into a unstable addict. At it’s rock and roll heart, 27 is primarily about love and loss. These two human values have been explored throughout theatre history, yet it is the modern telling of this tale that sets 27 apart from every other tragedy you’ve seen. Most of us are aware of the ‘27 club’ – Hendrix, Joplin, Winehouse, Cobain – but we’re often oblivious to the struggles that landed them there. Neither do we usually know much about the people around these celebrities, their friends and families, that had to cope with the loss. That is exactly the subject 27 tackles. More than anything, it focuses on Orpheus and the battle within his own mind, which makes this performance all the more captivating. I only wish playwright Sam Cassidy had committed more to his extended metaphor of Orpheus’ mind as an underworld.

Under Arlene Phillips’ direction the entire performance just exudes sex, temptation and sin, appealing to every primal instinct and drawing the audience in. Tight black costumes compliment the choreography, emphasising the sharp lines and precise movements of the gritty performance. The cast fervently executes every step and conveys admirable intensity in a theatre so sweltering I could barely clap without breaking a sweat.

Matt Wills’ signature complex melodies are beautiful, yet I hoped for a more powerful ending number and a stronger ‘fight or flight’ solo for Orpheus at the climax of the show. Nevertheless, the score is innovative. Vocally, it’s exemplary: Oliver’s raw voice externalises his inner struggle, juxtaposed with the silky harmonies of the three Fates, who narrate Orpheus’ story. Cassie Compton shines as Amy, the enduring girlfriend, and Lucy Martin gives us a seductive viper in Miss M. Both characters, however, could do with slightly more development. Ryan Molloy has the opportunity to give his clean cut Frankie Valli image the boot as Hades, the music mogul, but I was disappointed by his infrequent and short-lived appearances.

Cassidy’s rockstar concept truly lends itself to the powerful concert-esque lighting design, courtesy of Nick Eve. His use of hard lights gives a sharp edge to the overall picture and the harshness of the beam creates darker shadows. The result is a truly showstopping lighting display, complimentary to the dark material. The scenic construction is also superb, with its minimalistic, industrial look. The multiple levels allow the actors to be anywhere and everywhere. Quite honestly, it is a stage upon a stage!

Everything about this show is wonderful: the nods to mythology, the choreography, the set, a shirtless and sweaty Greg Oliver. The message is poignant and interesting, and within Cassidy’s dialogue some disturbing home truths are laid out. One that stuck with me was that we, as humans, find an odd pleasure in watching someone destroy themselves. Chilling notions such as these captured me fully throughout the performance (excluding the occasional glance to the left to see Tim Minchin, Noel Fielding and Professor Brian Cox sitting in the audience).

Cassidy shows us a fantastic application of an ancient Greek myth to our current society and it’s the lack of anything and everything traditional that had me rooting for this production. Cassidy’s writing is gutsy, fresh and fantastical and I can’t wait to see him continue redefining theatre, no matter how many old-timers protest. Cassidy is making a new kind of theatre, and I’m on board.

Previous: Interview: Dan Coleman on ‘The Man Who Would Be King’
Next: Gilgamesh, British Museum – Review