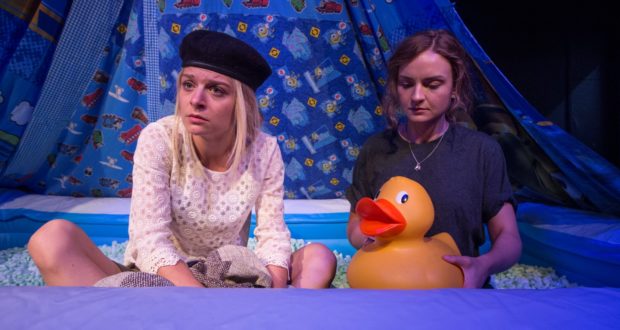 Cons: The pacing feels a bit rushed in the first half of the show.
Thlides, Lion and Unicorn Theatre – Review

Pros: Strong performances, great dialogue and a thoughtful design. Cons: The pacing feels a bit rushed in the first half of the show. I've come to rely on the Camden Fringe to give me new writing that's bursting with ideas, energy and bravery – usually in tiny theatre spaces I didn't know were (still) there. Thlides fits the bill exactly and was just what I'd hoped to see at Kentish Town's Lion and Unicorn pub theatre. The show's blurb doesn't tell you much, but one of the few things you ARE told is that a person called Spawny John&hellip;

A touching, funny and unapologetically absurd exploration of a troubled mind, full of waterslides, Jaffa Cakes and nice one-liners.

I’ve come to rely on the Camden Fringe to give me new writing that’s bursting with ideas, energy and bravery – usually in tiny theatre spaces I didn’t know were (still) there. Thlides fits the bill exactly and was just what I’d hoped to see at Kentish Town’s Lion and Unicorn pub theatre.

The show’s blurb doesn’t tell you much, but one of the few things you ARE told is that a person called Spawny John likes sitting in the middle of a waterslide at Butlins. Often he talks to a rubber duck about absent friends, breads, and English lunchbox food. So far, so intriguing. Into the action and you can see it’s true: no-one can make him move. An increasingly bizarre list of characters barrel in and try. In the first 20 minutes, I counted a pair of obnoxious boys (led by Ashley Winter) a charming, hyperactive frog (Grace Felton), a pink-goggled girl called Cassie with an unfortunate lisp (Louise Wilcox ), and an opinionated Lilo. Spawny John listens politely to all of their efforts – some less kind than others – but it’s obvious he really wishes they would all just go away and leave him in peace. On the subject of peace and quiet, I agree with him; full of energy, and entertaining though the cacophony is, a tiny bit more subtlety in pace would have intrigued me more.

What IS an awkward, unhinged, beret-wearing Army veteran doing in a Butlins slide? Cleverer reviewers might have moved on faster from this obvious first question, but I couldn’t. Other questions stack up too: what happened to his absent friend? Why is it sad that mint isn’t, in fact, a fruit? How many mini Babybels fit into a plastic lunchbox? We don’t get straight answers. In Lydia Lakemoore’s magnetic portrayal, it’s always clear what John feels, but hardly ever why. A puppet dragon and a Sherpa with a dodgy West Country accent try their best to generate all the right answers, but leave as bamboozled as everyone else.

Caitlin Abbott’s set is deliberately inviting: a giant polystyrene-filled paddling pool festooned with blue cartoon-character bed linen hung like mosquito nets. More Blue Cocoon than waterslide, it seems stuck mid-way between private (bedroom) and public (paddling pool). Deliciously awkward like so many moments in the play, the set too defies all attempts to make sense of it. Spawny John doesn’t know if he wants quiet or noise, and wants to stay in a safe place which might not be safe, and where maybe he shouldn’t be anyway. Working it out logically is the wrong way to go, I realised along with most of the, equally enthralled, audience. The right thing is to just go along with it. When you give up looking for realistic clues, meaning sort of creeps up on you.

When moments of quiet do come, they’re devastating. Sound and lighting are particularly well deployed to bring focus to Spawny John’s smartphone-led inner monologues, in which he writes to his army friend in a single pool of light. The darkness lifts a little, but remains outside, as John shares a packet of Jaffa Cakes and a gentle joke with his Doppelganger, who coaxes him back to the world with a kindness that floored me. Troubled characters’ alter egos are always evil, right? With so much pointing towards the chance of a ‘happy ending’, the very ambiguous end felt a bit mean. But I’m splitting hairs: I was happy to have spent an hour in the company of such a zany and intelligent bunch, who clearly aren’t afraid to take properly theatrical risks.