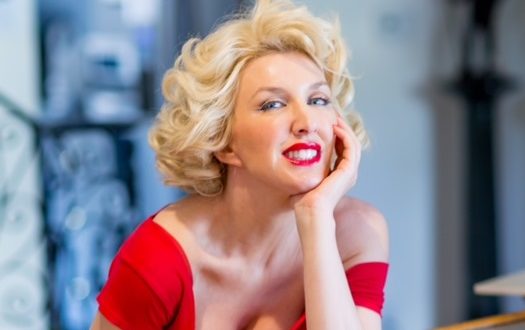 Pros: No other studio compliments live singing like the Jermyn Street Theatre.

Pros: No other studio compliments live singing like the Jermyn Street Theatre. Cons: The topic is captivating but the production lacks verve. The night she died, on the 5th August 1965, Marilyn Monroe had been listening to a stack of Frank Sinatra albums. Curious to uncover the link between the two stars, playwright and director Sandro Monetti undertook a year-long journey which lead him to meet influential people like Monroe’s last publicist Michael Selsman, the producer of Some like it Hot Walter Mirisch, and Sinatra’s granddaughter Amanda Erlinger. Despite its promising title, though, don’t expect Marilyn &amp; Sinatra to display&hellip;

A biopic without glitz or glamour, about the secret affair between Marilyn Monroe and Frank Sinatra.

User Rating: Be the first one !
The night she died, on the 5th August 1965, Marilyn Monroe had been listening to a stack of Frank Sinatra albums. Curious to uncover the link between the two stars, playwright and director Sandro Monetti undertook a year-long journey which lead him to meet influential people like Monroe’s last publicist Michael Selsman, the producer of Some like it Hot Walter Mirisch, and Sinatra’s granddaughter Amanda Erlinger.

Despite its promising title, though, don’t expect Marilyn & Sinatra to display any Hollywoodian opulence. The story is quite intimate and revolves entirely around the discontinuous and stormy relationship between the curvy blonde and The Voice, as narrated alternately by the two characters. Between 1954 and 1962 their paths crossed several times for professional and personal reasons and everything is explained in this 45-minute piece.

The set never changes but the action moves in different directions according to the events, with lighting mainly used to distinguish and shape the scenes. In the left corner there is a roughly made bed and across the room, beside an armchair, is a small table with a champagne bucket and some glasses. In the forefront, right in the middle, is a vintage microphone.

From there Marilyn (Erin Gavin) and Sinatra (Jeff Bratz) perform their most popular numbers, including I Wanna be Loved by You and Strangers in the Night. Although there is some connection between the lyrics and the plot, Marilyn & Sinatra is not a musical but better described as ‘a play with songs’. The Jermyn Street Theatre compliments like no other studio theatre the beauty of live singing and, on this occasion the seating area blends with the stage so that the public becomes part of the performance.

Both actors are decent vocalists and they work the stage with confidence but, ultimately, they deliver a dim impression of the timeless legends they’re meant to represent. It seems to me that they have focused on mimicking the original rather than trying to bring their own interpretation of how those personalities might have been, away from the spotlight.

Erin Gavin’s Marilyn is a dummy rather than the dumb blonde I expected to see, and she feels quite innocuous compared with the uninhibited bombshell she represents. The only sparkle in her performance is to be found in her sequinned floor-length golden dress, which entirely overshadows the other costuming choices. The nightgown is also pretty sensual but the halterneck white frock and red bodycon dress look cheap, not helped by the unnecessary absence of underwear. Jeff Bratz’s Sinatra doesn’t quite manage to convey the charisma you would have thought necessary to seduce the most desired woman in Hollywood.

The narrative is too conventional and the execution lacks the required dramatic intensity. Monetti fails to add some spice into a successful recipe but I’m certain that some character development and a more empathetic approach to the two celebrities could help in bringing to life this intriguing look behind the scenes. Marilyn & Sinatra has all the potential to be shaped into an enthralling play.