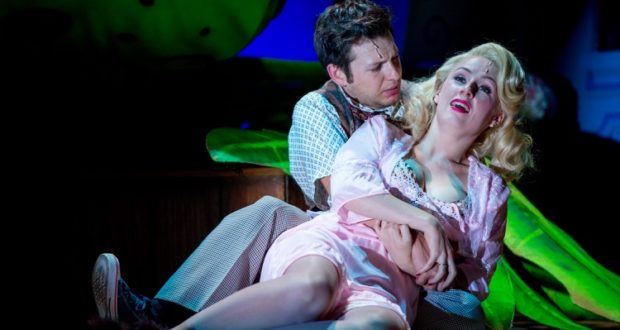 Pros: A brisk production, great songs and an enormous man-eating plant. Cons: Occasional imbalances in the sound mix made some lyrics hard to catch. They kept us waiting 15 minutes past the advertised start time, but when the opening number finally began, it was clear this was going to be an assured revival of this odd little classic that’s been coming around regularly since its first production in 1982. The sassy trio who form the show’s chorus (Sasha Latoya, Vanessa Fisher and Cassie Clare) immediately set the tongue-in-cheek tone for this tale of a carnivorous plant (aka a ‘mean&hellip;

A delightfully full-blooded revival of the quirky cult musical.

They kept us waiting 15 minutes past the advertised start time, but when the opening number finally began, it was clear this was going to be an assured revival of this odd little classic that’s been coming around regularly since its first production in 1982. The sassy trio who form the show’s chorus (Sasha Latoya, Vanessa Fisher and Cassie Clare) immediately set the tongue-in-cheek tone for this tale of a carnivorous plant (aka a ‘mean green mother from outa space’) which transforms the lives of the hapless employees of Mushnik’s Florist on a 50s American Skid Row. These are our hero Seymour (Sam Lupton) and Audrey (Stephanie Clift), with whom Seymour is smitten. With Seymour’s discovery of a ‘strange and interesting’ plant – named Audrey II in tribute to his love – the fortunes of Mushnik’s Florist start to look up, and there’s a real sense of things changing for the better. But that’s before Audrey II’s sinister dietary requirements come to light…

Lupton and Clift have likeability in spades, and the acting and vocal chops to match. Add some irresistible tunes in a flavoursome mix of musical stylings – predominantly Motown, Doo-wop and ballads, with camply witty lyrics – and everything falls into place for a feel-good show with bundles of energy and charm. Musical director Dustin Conrad heads a highly skilled band, effortlessly switching between genres, with the highlights of the evening being Audrey II’s demanding Feed Me and the show-stopping Suddenly Seymour.

There isn’t a weak link among the cast, and the choreography is as showy as you could hope for in this sort of production. My only technical criticism would be that the sound levels sometimes drown out the singers. The staging is simple but effective (with the exception of a few dodgy sight-lines) and the drab, sleazy world of Skid Row is effectively evoked.

With all the talent on display, it’s a bit of a shame the show’s publicity image focusses solely on ex-X-Factor contestant Rhydian, who stars in the secondary role of Orin, Audrey’s sadistic dentist boyfriend. But that’s marketing, and Rhydian is a relative ‘name’ whose first appearance is greeted with cheers from his fans in the audience. The singer gives his all in a game cameo, and is believably threatening to sweet Audrey, which means we’re not that upset when his character comes to a grisly end. The casual use of domestic violence as a plot device might be expected to jar with a contemporary audience, but this isn’t the place to look for sociological insight.

Any Little Shop of Horrors stands or falls on its realisation of Audrey II, and here the production excels. The expert puppetry is both funny and frightening as the plant grows from a cute but freaky pot plant to a sprawling monstrosity taking up half of the shop floor.

Having enjoyably set up the premise of the show, the downbeat resolution came rather abruptly, but any reservations where swiftly swept away by the rousing finale and curtain call.