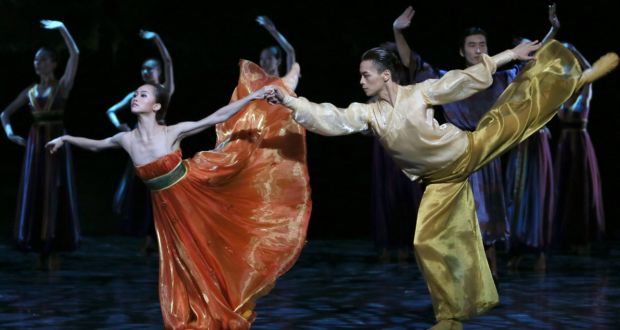 Pros: Visually stunning with an impactful score. Cons: Broken pace, unpolished ensemble. The capital seems to be in the midst of a battle of the ballets this summer. In one corner, we have the three week season of the Bolshoi; in another corner, The Australian National Ballet's Swan Lake, the far corner The Shanghai Ballet, and in the final corner The St Petersburg Ballet Theatre returns to the London stage next week with Her Name Was Carmen. Londoners truly do have smorgasbord of tutus, tiaras and toes on pointe to chose from. I do love ballet, but after seeing&hellip;

An ancient love story adapted into a striking ballet that needs fine tuning.

User Rating: 2.85 ( 1 votes)
The capital seems to be in the midst of a battle of the ballets this summer. In one corner, we have the three week season of the Bolshoi; in another corner, The Australian National Ballet’s Swan Lake, the far corner The Shanghai Ballet, and in the final corner The St Petersburg Ballet Theatre returns to the London stage next week with Her Name Was Carmen. Londoners truly do have smorgasbord of tutus, tiaras and toes on pointe to chose from.

I do love ballet, but after seeing the critically acclaimed Shanghai Ballets’ new production Echoes Of Eternity, I am second guessing myself. Don’t get me wrong this show, in parts, is beautiful but it’s let down by its serious lack of story arch and a weak cast. I make it a steadfast rule to never read a programme before a ballet or opera as I adore working out the plot through the movement or emotions of the songs. If only I’d broken this rule.  At the interval I, along with my fabulous plus one and some fellow reviewers, were all in the bar quite perplexed as to what we were watching. Echoes of Eternity, inspired by the 8th century Chinese poem Song Of Everlasting Sorrow, details one of China’s most popular legends: the story of the romance between the all-powerful Emperor Ming and his favourite concubine, Lady Yang, which ended in tragedy and led to the downfall of the Tang Dynasty. On paper it sounds incredible; however as a new contemporary ballet, it just doesn’t work. The plot is so disjointed with broken and badly paced scenes that you are truly lost, which results in you not connecting with the story. I found myself desperate for a toy soldier, black swan, prince charming or ghost of a peasant girl to connect with across these two laborious acts.

Both Wu Husheng as the love struck Emperor and QI Bingxue as Lady Yang, are strong and emotive dancers with magical form. I sadly didn’t believe their love story and didn’t feel any of that unbridled passion that is so key to any dramatic ballet. I’m also not sure what costume designer Agnes Letestu was doing by putting the Emperor in an Alton Towers poncho? However, Lady Yang’s orange dress and some of the wider ensemble costumes are visually stunning and a true stand out of this show. ZHANG Yao, WU Bin and ZHANG Wenjun as the secondary characters all danced well. ZHAO Hanbing as the Moon Fairy is captivating but for all the wrong reasons; she bizzarely lingers, crouches and dances like Miss Hannigan in Vauxhall at 6am. I found this choreography from Patrick De Bana baffling, as you can see from some of the more tender scenes that Hanbing is superb. The choreography as a whole I found a bit ‘ballet by numbers’; there were no stand out scenes apart from the mass ensemble pieces, which were stunning, although a tad unpolished. I did find the numerous curtain calls a tad self indulgent at the end.

The simplistic set by Jaya Ibrahim is underwhelming. I felt that the opening scenes with a naked stage,  exposed lighting and brick work far more impactful than the displaced and occasional backdrops. James Agnot’s lighting helped save the day in some parts. The true hero of this ballet is the gut wrenching and goose bump inducing score from Armand Amar, Ravia Goldschmidt, Kodo, Henryk Gorecki and the incomparable Phillip Glass. The music is beyond sublime and, while what you are seeing on stage may be dissapointing, this score really does take you on the magical and emotional journey that ballet should.