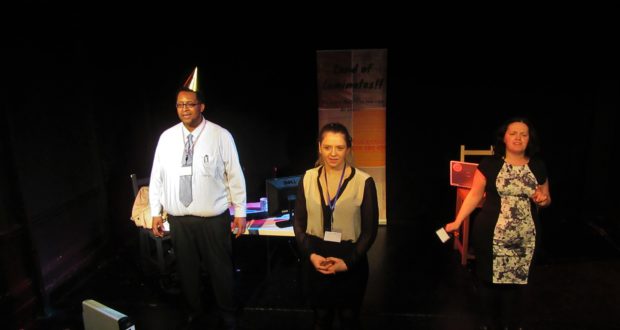 Pros: The re-written lyrics, which perfectly sum up office life and the politics that it holds, fit in seamlessly with the famous melodies of Les Misérables.

Cons: It may not be quite so funny if you are not familiar with the West End show before seeing this parody.
The Miserables, Etcetera Theatre – Review

Pros: The re-written lyrics, which perfectly sum up office life and the politics that it holds, fit in seamlessly with the famous melodies of Les Misérables. Cons: It may not be quite so funny if you are not familiar with the West End show before seeing this parody. You wouldn’t expect a musical about working in a monotonous office, setting new lyrics to the music of Les Miserables, to work - but this really does. Upstairs in the Oxford Arms pub in Camden you'll find the charming Etcetera Theatre and this is where our evening of laughter took place!&hellip;

This is a very funny show and I was laughing throughout, I left the theatre with a big smile on my face.

You wouldn’t expect a musical about working in a monotonous office, setting new lyrics to the music of Les Miserables, to work – but this really does. Upstairs in the Oxford Arms pub in Camden you’ll find the charming Etcetera Theatre and this is where our evening of laughter took place!

The show is set in the offices of Land of Laminates, featuring the General Manager Mr Williams (Spencer Lee Osborne), his secretary Claire who is just about to leave (Gemma Seren) and her replacement Beth (Stephanie Watkins). Each divulges their own grievances through the songs of Les Misérables, but with completely new lyrics. This was not what I had expected from the show but actually worked fantastically well.

Claire’s rendition of I Dreamed a Dream, in which she questioned how she’s ended up working where she has, was absolutely hilarious. The line in which she stated that her 2:1 arts degree did not lead her on the path she had hoped obviously struck a chord with many of the audience as the first of many bouts of laughter filled the room.

Beth’s rendition of On My Own was very funny, a modern take on this classic heart-breaking moment where Beth contemplated her dating life and her many attempts at finding “the one” using dating apps – but all she has ever seemed to have been sent are explicit photos!

One of the funniest moments was when Mr Williams launched into his rendition of Master of the House, but this version was of course called Office Manager. He also sang of the Empty Chairs in Empty Cubicles when his secretaries left their desks for lunch. He was most concerned about them returning with his sandwich.

Another highlight was their version of At The End of the Day, with lyrics such as “you’re one step closer to the weekend” replacing the iconic lyrics of the original show.  The new versions of Les Misérables classics were very well done, and by the end of the show I realised my face hurt from laughing and smiling so much throughout.

I’m not sure that this show would be quite so funny if you were not already familiar with the music of the West End hit Les Misérables.  Although anyone who has worked in an office can empathise and laugh at the office politics which play out. In one scene Claire and Beth disagree about whether the radiator should be on or not, and a very funny passive aggressive scene plays out.

Although the vocals of the cast were not quite up to the standards of a West End cast of Les Misérables, they pulled off impressive performances in this hilarious parody. Gemma Seren had a particularly impressive vocal performance in I Dreamed a Dream. There were a few slip-ups, particularly at the start when we were left waiting quite a while with nothing happening once the house lights went down, but this Edinburgh preview bodes very well for a successful run up at the Scottish capital’s famous festival in August.

Author & Director: Nicola Masters
Original Composer: Claude-Michel Schönberg
Adapted by: Nicola Masters
Booking Information: This show has now completed its London run, but will be at Just The Tonic at The Caves, The Wee Room, Edinburgh. August 4th – 28th (not 15th) http://edinburgh.justthetonic.com/performances.php?eventId=88:832