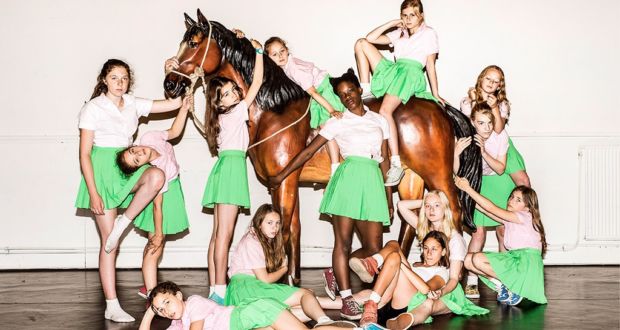 Cons: The position of the surtitle screens on either side of the stage will give your neck more exercise than it wants or needs.
The Hamilton Complex, Unicorn Theatre – Review

Pros: It’s brilliantly designed, beautifully choreographed and aggressively awkward madness in the best possible way. Cons: The position of the surtitle screens on either side of the stage will give your neck more exercise than it wants or needs. What do thirteen 13-year-old girls, one male bodybuilder and one plastic unicorn have in common? Well, they’re all in my new favourite show. In The Hamilton Complex, part of LIFT 2016, director Lies Pauwels explores the uneasy relationship we have with female sexuality, and she certainly doesn’t pull any punches. ‘Are there any paedophiles in the audience tonight?’, ask one of the girls&hellip;

A powerful and provocative show that should be mandatory viewing for anyone who is, was or has forgotten what it’s like to be thirteen.

What do thirteen 13-year-old girls, one male bodybuilder and one plastic unicorn have in common? Well, they’re all in my new favourite show.

In The Hamilton Complex, part of LIFT 2016, director Lies Pauwels explores the uneasy relationship we have with female sexuality, and she certainly doesn’t pull any punches. ‘Are there any paedophiles in the audience tonight?’, ask one of the girls a mere five minutes into the show. ‘We don’t want to offend anyone, but we’d like to know what to expect.’ It sets the tone for a performance that’s equal parts funny and alarming. In the next scene, the girls run around the stage giggling and flashing the audience and each other their pants, while an increasingly exasperated male security guard tries to stop them. It’s funny because it’s such an authentically childish thing to do: seeing what grownups are uncomfortable with, and then prodding at it until something gives. So you laugh, but then come the doubts: is this actually innocent fun? Should you laugh? Should you watch? Should LIFT even have programmed a show that features a bunch of 13-year-olds showing off their knickers? Pauwels puts a sharp focus on how we, as a society, are mortally afraid of sexualising children, yet find infantilising women an incredible turn on.

But The Hamilton Complex is more than a feminist critique; it’s also about growing up, or maybe even about existing at all, in a world that can be strange and chaotic and cruel. A lot of the things these girls are unsure about at thirteen are also the things I’m unsure about at twice their age, and will probably still be at three, four or five times thirteen. And yes, I too am guilty of thinking of teenagers as being full of misplaced angst and self-pity, but this show reminded me that growing up is definitely much easier in hindsight than when you’re actually doing it. In other words, if the last week in British politics has made you want to inject your eyeballs with a mixture of burning vodka and crystal meth, just take a moment to be happy you’re not a teenager on top of that as well. (Unless you are, in which case, my condolences.)

This rollercoaster ride through the adolescent mind wouldn’t be complete without the excellent design by Chloe Lamford and Hilde Mertens. A rainbow made of neon light, toys and flowers hovers over a cutefest with Lolita dresses and pink puppies one minute, and a war zone the next. The music, selected by Pauwels, ties the individual scenes together into a more or less coherent whole (or, at least, as coherent as you might reasonably expect from a show like this). The only downside to the evening is the positioning of the screens with the surtitles, which were on either side of the stage. Being Dutch, I had no problem following the show in its spoken Flemish, but on the occasions I read along with the surtitles, the looking back and forth between the screen and the stage was a bit too Wimbledon for my liking. It is, however, a small price to pay for such a painfully insightful, gloriously uncomfortable and unexpectedly uplifting show. As I left the auditorium, a women in front of me murmured to her friend: ‘I’m snotty crying, and I’m not even sure why!’ And if that doesn’t deserve five stars, I don’t know what does.