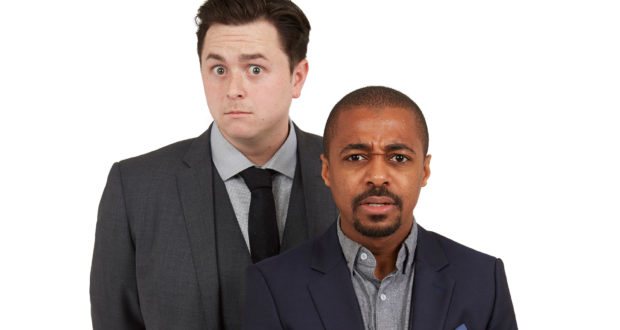 Comedy duo Noah & Jordan have had a very exciting few years. As the creators of the award-winning online series Wannabes and Daydreamers – in addition to their popular sketches, which have been featured on the British Comedy Guide and Funny or Die – the pair are effortlessly accessible, whether they’re RnB-loving grandmas or petty superheroes. Now, however, they are preparing to show their own personalities with INSERT TITLE HERE, an intimate sketch show for the Camden Fringe Festival. Sarah Tatersall spoke to Noah and Jordan about their comedy partnership and the show’s upcoming premiere.

Your live show has quite an ambiguous title. What can you reveal about INSERT TITLE HERE?
Jordan: It’s ambiguous because it’s a very fast-paced show. There’ll be lots of different sketches, different flavours and different characters, so we thought that Insert Title Here kept it very open. It’s going to be a very different kind of show.

How does the live show deviate from what we’ve seen in your sketches, and can we expect to see any of the same characters?
Noah: There’s lots of new sketches, and we’re also going to bring back some of the more popular characters, like the two old ladies, Betty and June, who love RnB and Reverend Manlove. We certainly want to continue with those characters, but we also want to show what else is in our kooky brains.

J: When we write sketches for online platforms, they have a very different feel to sketches we would do live. The live show allows us to play characters that just wouldn’t work online.

N: I think the audience will get to know us as people – the show will be more like a play session. There’ll be lots of dressing up on stage and it will be really fast moving between each sketch.

How does the writing process work between you both?
N: It’s different every time. Sometimes one of us will go away and come up with an idea that we’ll workshop, but most of the time it’s just us two coming up with kooky ideas between ourselves and seeing what makes us laugh.

J: We enjoy comedy a lot, so we find that just through hanging out, we’ll come up with some weird voices and characters naturally. A lot of the characters come through us chatting and whatnot.

N: Part of that process is performing those sketches to some trusted people, usually our director, and them telling us, ‘That’s not funny’, or to go away and add another twist.

The two of you have such a natural partnership. How did you first start writing and performing together?
N: We met at drama school and were best friends there, so we’ve always had a sort of telepathic idea of what the other will say or do. We were always getting told off. We’d be in a warm up class where we’d have to throw an imaginary ball around the class, and we got told off for throwing the imaginary ball to each other too much. We were like, ‘It’s an imaginary ball! Just make your own ball!’ We’ve always had that chemistry and have always enjoyed making each other laugh.

J: When you leave drama school, you’re encouraged to create your own work. We really enjoyed the same comedy, so decided to write together and see how it went. It has all grown from there, really. What started as us trying to see what makes us laugh, now becomes us trying to see what makes other people laugh. It’ll be really interesting with the live show to instantly know what people think. We’re looking forward to lots of guest interaction, getting people involved and letting them get to know us in a way that you can’t through the online sketches.

As a fellow Camden Fringe performer this year, I know how popular the festival is, with so many shows and venues taking part. What sets your show apart?
All the shows are going to be great and individual in their own way. We have such a varied interest in comedy, but over the years we’ve really started to hone our own style. We don’t know how that’s going to transfer to a live show, but we know that it’s going to be fun, packed with loads of silly things and constantly moving. We don’t want to take anything too seriously, so, yes, fun! Not that other shows won’t be fun . . .

We want it to fly past. We want people to sit down and before they know it, it’s over, like they’ve been in a whirlwind of sketches. We decided that we want to break a lot of the stereotypical devices of theatre. We’d like to be on stage as the audience leaves, talking about the show and encouraging people to give comments as they leave – just silly little things that break the barriers between audience and performer. We have no idea if those ideas will work, but we think the chaos will add to the comedy . . . we hope, anyway.

What do you have planned for after the festival?
J: We want to take the show for a run in London and give it an extended life, but we’re also working on other projects. We’re working on new sketches, some comedy songs and an animation pilot that will hopefully be ready in September.

Not too long ago, X Factor’s Peter Davidson featured your series. Do you have any X Factor-style sob stories that might convince audiences to come and see your show?
J: Ooh I don’t have many sob stories.

N: Of course you do!

J: I had to sell my hair to fund the show!

And on that note . . . how could we refuse? Tweet the boys your sketch ideas @NandJComedy. Their favourite idea will be turned into a sketch and included in the show.

Noah & Jordan‘s INSERT TITLE HERE will be performed at the Hens and Chickens Theatre on 13 and 14 August. Tickets are available here.