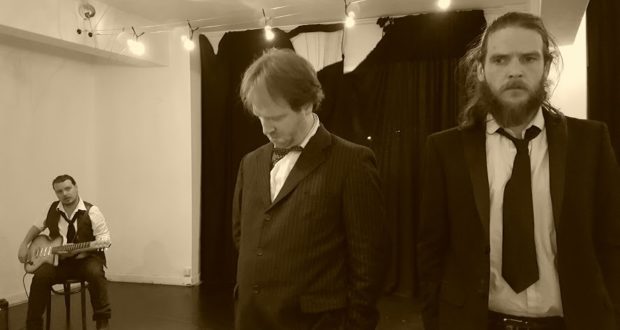 Pros: Simon Kane has a strong theatrical presence. Cons: Lacking direction, plot, action, character development and human interest. "Dark, comic and strange" is how Matter bills itself, and it's a fair description. Two men, referred to in the programme (but not in the play) as Bird and Adam, sit at a low table playing an endless game of Snakes and Ladders with mismatched dice and a hand-drawn board. Bird (Simon Kane), in a pinstripe suit and bow tie and with a neat, short beard, is clearly in control. It's he who keeps the game going, and who pushes the&hellip;

A dull and pointless evening.

“Dark, comic and strange” is how Matter bills itself, and it’s a fair description. Two men, referred to in the programme (but not in the play) as Bird and Adam, sit at a low table playing an endless game of Snakes and Ladders with mismatched dice and a hand-drawn board.

Bird (Simon Kane), in a pinstripe suit and bow tie and with a neat, short beard, is clearly in control. It’s he who keeps the game going, and who pushes the dialogue forward. With a strong, resonant voice, he’s clearly an actor of some experience, adding limited physical gesture to the static role. “It’s over now,” he tells Adam. “The dreaming. This is it. Will that do?”

Adam (Craig Hannah), in a dinner jacket and undone black cravat, also has a beard – but his is long and unruly, his long hair pulled back in a bun. His character is disoriented, baffled, willing to be guided by Bird while wanting to rebel against him. Adam doesn’t know where he is, or what’s going on, but he reluctantly agrees to keep the game going.

The two characters barely move, except to shake the dice and keep the pennies moving around the board. They move their makeshift counters in different directions, as if the board is oriented differently for both of them. As they take their turns they relate allegorical anecdotes. Bird’s deal with tales of animals facing death, while Adam’s are concerned with solitary men. All the stories deal with the human condition: “If we know something is morally wrong and do it anyway, we are being immoral. Animals don’t do that,” explains Bird.

The static inaction (there’s no director listed in the credits, and it shows) is lightened only for a moment when Bird plucks an apple from the goldfish bowl where it’s been floating, and eats it. “Where’s fish?” asks Adam. “Fish has gone,” replies Bird. “I for one will miss him.” To which he adds “Or her,” which draws a chuckle from the sympathetic first (and last) night audience, desperate for anything approaching humour.

The dialogue is punctuated by Voice (Paul Thompson), who sports both a long straggly beard and long straggly hair, and who also introduces the evening with a lengthy monologue in occasionally rhyming blank verse. His interludes, which do not relate to or interact with the other characters, are random, scattershot descriptions of contemporary city life: “The police presence is more than ever, tension like a knife to the throat… there’s a whisper in the trees of the crying of bees.”

Thompson mouths his stream of consciousness verse in a deadpan, unemotional and unengaged way, as if he has no idea what the words mean – all the more surprising since he’s also the play’s author. When he’s not speaking he sits at the side of the stage, detached from the proceedings, plucking a desultory acoustic guitar accompaniment (“Original music by Paul Thompson”, says the programme credit).

Matter was funded by a Crowdfunder campaign, which raised £190 from 13 backers to enable the production to be staged. As a play it’s ramshackle and inconsequential. With no character development, no action, no plot, a few random thoughts on morality and only cursory stabs at humour. It felt like a long, drawn-out evening, despite the fact that the entire performance lasted barely over half an hour.