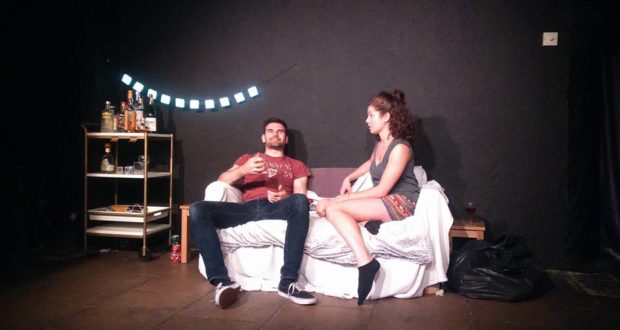 Cons: Plot and storytelling are weak; the heart of the story is buried under character exposition.
Different Class, Barons Court Theatre – Review

Pros: Committed actors, relatable story, lighting design and staging make good use of the small theatre space. Cons: Plot and storytelling are weak; the heart of the story is buried under character exposition. Tucked away amongst the fancy Victorian terraced houses of West Kensington sits the Barons Court Theatre. Situated in the cellar of the lively Curtain's Up Pub, the Barons Court Theatre offers a small thrust stage within a cramped 60-seat venue to see intimate dramas such as Kevin Lee's latest play Different Class. In Different Class, we meet Maria, a young twenty-something from a little Berkshire town,&hellip;

A cast of strong actors in play about what it means to be young, in love, and afraid to say so, but misses the mark.

In Different Class, we meet Maria, a young twenty-something from a little Berkshire town, who works a fancy PR job in the City. Her friend Andy, a budding stand-up comedian from the North, stops by. Good friends, these two begin to recount events from last evening’s raging house party, troubles with careers, housemates and relationships. All the while, they avoid the one thing that they’re both starting to realize: their feelings for one another.

Both actors give stellar performances in the piece, and each hold their own in their own on the stage. Harriet Grenville is fierce and fiery as Maria, while Duncan Mason is witty and jaded as Andy. Both actors compliment each other in ability and play well off one another.

Although Lee’s story is relatable to audiences, his play falls short of stating his purpose. Out of the entire 60 minutes, we only get to the root of the problem between our two characters for the last 15-20; the rest is spent establishing who these characters are, how they relate to one another and discussing topics. These elements need to be in there, of course, but I missed the sense of why these events were happening. There was no sense of urgency behind the action. The subtleties of the characters’ backgrounds also didn’t warrant enough of a distinct class line, as the title describes. His staging as director uses the space well, despite the oddly placed entrances and exits.

Hannah Roza Fisher’s lighting design gives depth to the story, showing the passage of time and different moods throughout the piece, bringing it all together.

All in all, Kevin Lee’s Different Class focuses on an insightful, realistic depiction of young relationships in our millennial age, allowing us as the audience to reflect and relate. If told with more immediacy, it could stand out in a different class.