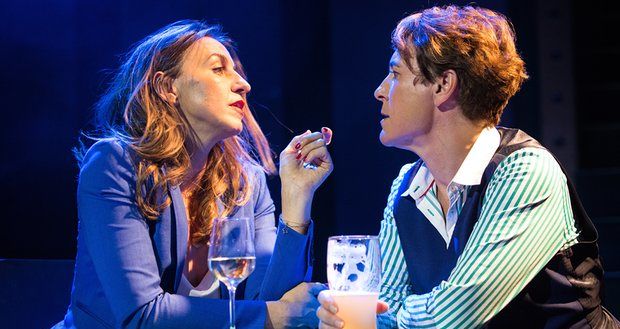 Cons: Caricatured and over-reliant on shock-tactics
Boys Will Be Boys, Bush Hall – Review

Pros: A gorgeous set, cabaret-style presentation, barnstorming performance from Kirsty Bushell in the lead role. Cons: Caricatured and over-reliant on shock-tactics Melissa Bubnic’s new play, Boys Will Be Boys, is ostensibly about sexual politics; our heroine, Astrid, frames her story in these terms in the opening scene. But really gender is just one aspect of the play’s broader themes of organisational culture and the price of survival. Astrid is an FX broker who, talented as she clearly is, has had to play gender politics to thrive in that male-dominated universe. She will match the boys drink for drink, but&hellip;

A slick and funny provocation.

User Rating: 2.11 ( 4 votes)
Melissa Bubnic’s new play, Boys Will Be Boys, is ostensibly about sexual politics; our heroine, Astrid, frames her story in these terms in the opening scene. But really gender is just one aspect of the play’s broader themes of organisational culture and the price of survival.

Astrid is an FX broker who, talented as she clearly is, has had to play gender politics to thrive in that male-dominated universe. She will match the boys drink for drink, but never forgets that looking ‘fuckable’ is a critical part of her stock in trade. When she takes on Priya, an ambitious young trainee, she sets about passing on all the hard lessons she has learnt about City life, viz., always get the coffee order right, look like money to attract money, give the client what he wants and, above all, don’t be a pussy. At the same time she’s falling for self-assured prostitute Isabelle, and finding that she can’t quite buy the intimacy she wants.

The story is told in an unusual cabaret style. Beautiful Bush Hall is made up as a jazz club-cum-ladies’ loo, with a grand piano, proscenium arches studded with lights and a row of three pink cubicles. Astrid opens the show with a song, and then moves into the direct address of a stand-up comic or professional raconteur. From then on the story is punctuated with songs, low-key dance routines and passages where Astrid steps out of the action to riff entertainingly and often provocatively, on topics including the All-American Mom and sexual positions. While Boys Will Be Boys doesn’t share Ally McBeal’s surreality, it certainly brings to mind that show’s after-work bar and singing characters (and fascination with loos). Kirsty Bushell, who plays Astrid, is a lovely, expressive singer, and with Jennifer Whyte accompanying on the piano, these cabaret interludes are a pleasure in themselves.

I do wonder which gender feels more uncomfortable watching Boys Will Be Boys. There is plenty here to outrage both sexes, as well as some shock-tactic jokes with the potential for unisex offence. In the end, however, Melissa Bubnic’s play traduces men and women equally. A woman is raped and advised not to make a fuss about it. Yet we are shown that her attacker is, in different ways, no less a victim of the dog-eat-dog culture in which they operate. It shows how a brutal environment brutalises anyone who inhabits it. Whether Deepcut barracks, the Frat House, Abu Ghraib or a City brokerage, Bubnic suggests that the behaviour of the lowest common denominator can be contagious. And whilst Astrid resolutely sees everything through the prism of gender, what the play actually demonstrates, through her loathsome boss, Arthur, is that the key determinant in becoming, and remaining, a master of any of these universes is not gender, but lack of empathy.

The other point it makes forcefully and certainly too cynically, is that everyone sells something of themselves. The prostitute sells sex for money, but while she controls the transaction, she retains her dignity. The banker’s wife sells her self-respect for a team of Filipino domestics and a holiday home in Mustique. All that matters is that people only sell what is theirs to sell and that they get what they want in return. Whilst there is enough truth in all this to make it interesting, the play relies heavily on caricature, and subtlety is in short supply.

That said, Astrid is an interesting, complex and surprisingly likeable central character, who tells with honesty and humour the story of the round she lost. The cabaret presentation, with jazz piano running throughout, lifts the show above what, played straight, would be broad and a bit cliched. Boys Will Be Boys is most definitely a provocation, but the provocation is beautifully delivered with wit, variety and, I should have mentioned, a splendid all-female cast.