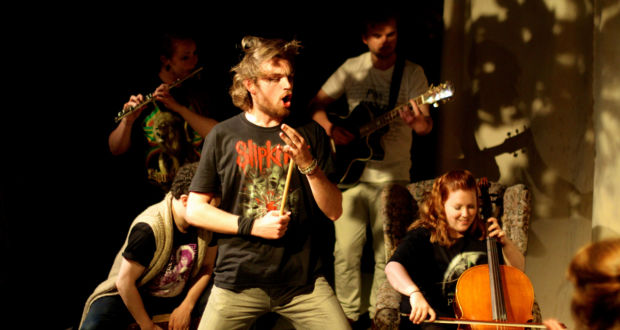 Pros: Jam packed with music and laughter from the start, this feel good farce is bound to make you chuckle.

Cons: If you’re looking for a full length version of the play, this short and sweet production isn’t for you.
A Midsummer Night’s Dream, Jack Studio Theatre – Review

Pros: Jam packed with music and laughter from the start, this feel good farce is bound to make you chuckle. Cons: If you’re looking for a full length version of the play, this short and sweet production isn’t for you. As 2016 is the 400th anniversary of Shakespeare’s death, you’re sure to find a couple of the Bard’s shows to pop along to this year. In fact, in July alone there are least six different productions of A Midsummer Night’s Dream, so there’s no excuse not to see the play. But which of those six productions should you see?&hellip;

One not to miss. A night of fun filled laughter, with exceptionally clever direction and great performances all round.

User Rating: 4.77 ( 3 votes)
As 2016 is the 400th anniversary of Shakespeare’s death, you’re sure to find a couple of the Bard’s shows to pop along to this year. In fact, in July alone there are least six different productions of A Midsummer Night’s Dream, so there’s no excuse not to see the play. But which of those six productions should you see? Well, there’s no reason why you shouldn’t go along to all six, but Wildcard’s production is certainly not to be missed.

The production takes place in a simple black box room at the highly reputable Brockley Jack Theatre, where we are met by a band of players welcoming us into the space for the happy celebration of Theseus (Abi McLoughlin) and Hippolyta’s (Rhiannon Sommers) wedding day.

For those of you who are unfamiliar with A Midsummer Night’s Dream, the plot consists of four interconnecting and hilariously farcical stories. First there is the wedding of Theseus and Hippolyta, which is the focus of the play’s action. Then there are the stories of couples Hermia and Lysander (who begin the play in love with one another) and Demetrius and Helena (who start the play in conflict, as Helena loves Demetrius but Demetrius loves Hermia). Meanwhile, Peter Quince and his group of tradesmen turned actors (the ‘Rude Mechanicals’) are preparing to perform a play at the wedding and Titania and Oberon, king and queen of the fairies, have parted ways. It’s all a little bit chaotic but that just makes the whole thing even more hysterical.

Though good old Will’s scripts are brilliant, it takes something special to make a Shakespeare play your own, especially when there are five other productions going on at the same time, including one at the Globe. Luckily, Wildcard’s production has just that. This condensed 90 minute production is short and sweet, fitting in all the important parts of the play and leaving the audience no opportunity to lose their concentration. Filled with music and song from start to finish, this production has a little bit of everything.

The whole cast put absolutely everything into the production and the hard work certainly pays off. The Mechanicals (Harriet Ruffer, Ben Lydon, Robbie Curran, Christie Peto, Elly Lowney) are a hilarious ensemble with Jack J Fairley taking the lead as the hysterical ass-headed Bottom. Rhiannon Sommers and Abi McLoughlin are excellent as Titania and Hippolyta and Oberon and Theseus respectively. Truth be told, I’m not sure why the roles of Oberon and Theseus were played by a woman – possibly to emphasis the contemporary feeling of the production – but whatever the reason, it works. James Mear, as Puck, has an absolute gift for music and plays the guitar beautifully as he cavorts around the stage bare-chested and in black leather trousers. My only criticism would be that he needs to be slightly more mischievousness. Though musically Mear is exceptional, I did want more devilishness from Puck.

James Meteyard has shown real talent with his extremely clever and creative direction. Through the doubling up of characters and the simple shifting of lighting, he has skilfully created two completely different yet connected worlds. With the lovers also playing dainty fairies and the Duke and Duchess of Athens playing the high and mighty monarchs of the forest, we are able to see an unexpected, yet brilliant link between the two sets of characters. The use of metaphorical fairy dust to enable the ‘ordinary folk’ to enter the world of dreams is another excellent example of how well thought out the production is.

Costumes also bring the production into the present day, with half the cast in Slipknot and Pink Floyd t-shirts and the other half resembling the cast of Made in Chelsea. The choice of costumes help the audience to recognise characters, their background and which part of the play’s society they come from. The set is simple yet effective, with three white curtains used as a backdrop during the Mechanical’s performance of Pyramus and Thisbe. The rest of the stage remains bare except for a string of fairy light vine leaves and two matching floral sofas, which are used for various comical moments.

Wildcard’s production of A Midsummer Night’s Dream has something for everyone and will have you laughing throughout. If you’re new to midsummer dreaming or wary of Shakespeare, don’t let that put you off the show. This production is a real hoot with excellent performances from all. The venue gets quite hot, but as you drift into the dream, the action will take your mind away from any nastiness outside the theatre.