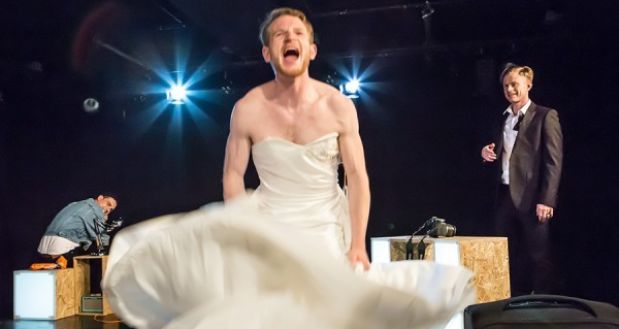 This Much, Soho Theatre – Review

Cons: There is an unsteady build up to the show’s climax in the final scenes, which could be better developed.
This Much, Soho Theatre – Review

Pros: A slick production featuring meaningful and creative performances, stage design and writing. Cons: There is an unsteady build up to the show’s climax in the final scenes, which could be better developed. Those who are ready for a daring piece of modern theatre exploring contemporary issues through the stories of often under-represented communities should not let This Much pass them by. Central character Gar is torn between two relationships: a stable, long-term commitment with partner Anthony and an unpredictable, passionate adventure with Albert. His dilemma is exacerbated by his battles against the boundaries of both relationships, as each character approaches the&hellip;

An exciting production tackling the role of tradition in modern culture in a responsible, balanced way. A fresh, funny and touching piece of contemporary theatre which audiences should flock to for style as much as content.

User Rating: Be the first one !
Those who are ready for a daring piece of modern theatre exploring contemporary issues through the stories of often under-represented communities should not let This Much pass them by.

Central character Gar is torn between two relationships: a stable, long-term commitment with partner Anthony and an unpredictable, passionate adventure with Albert. His dilemma is exacerbated by his battles against the boundaries of both relationships, as each character approaches the issues of monogamy, family and what love really means differently. These issues are particularly important within the LGBT+ community and I was glad to see them dealt with in such an extensive fashion. Each character’s contrasting viewpoint is given gravitas and credibility and key themes such as the role of the homosexual male in the traditional nuclear family are examined. This Much also considers wider issues, including the financial and social challenges that surround aspiring to the ideal of marriage.

I loved the use of music in this production. As you enter the black box space at Soho Theatre to Flashdance, This Much certainly feels like a real wedding disco. Actors DJ and take your photo and as the show progresses there are sobering realisations and you start to notice the poignant lyrics of seemingly happy songs.

Alex Berry’s set is stunning and simple, managing to seem as intimate as a home while maintaining the freedom to allow the story to transport you anywhere. At some points in the play, two scenes are portrayed simultaneously in the same space. For instance in one scene the audience watches Anthony at home and also walking through his partner’s adultery elsewhere, a constant reminder of the intense impact the characters have on each other’s lives. The intensity of the staging is enhanced by Kate Sagovsky’s direction, which never allows an actor to leave the performance space or step out of role.

Although movement and dance are common story-telling devices in modern theatre, rarely are sections of simple movement as honest, revealing and magical as in This Much. The combination of movement with the thoughtful deconstruction and reconstruction of the set provides for some breath-taking moments.

Due to the shift in time in the later stages of the play, the expositional confrontation between two central characters doesn’t feel like it is fully earned and gives away too much too quickly. This is a shame in a story which constantly plays with what characters know but never confess to. However This Much arguably requires such an outburst in order to justify its alternative title (An Act of Violence Towards the Institution of Marriage). Without it, the show would only address personal problems and not wider issues regarding the idealised institutions of marriage and family.

Without giving too much away, the plot twist in the final scene lacks surprise and does not feel entirely necessary as the audience knows the cast by this point in the play. Having said that, my friend who watched the show with me had a completely different response.

Audiences should be prepared for nudity in places, which is completely earned by the actors in each instance. For me, it made the theme of betrayal much more powerful and real than if the physical reality of an affair had only been implied, as other productions may have chosen to do.

In supporting This Much, Soho Theatre once again proves why it is so renowned for incredible new writing. I whole-heartedly recommend this innovative and brave show.