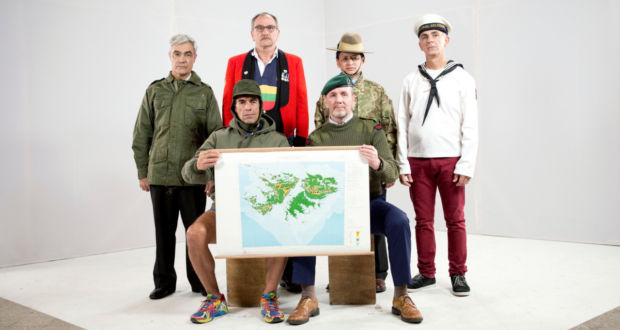 Pros: An amazingly imaginative piece of theatre. The visual aspects given to the performers’ stories make this a powerful experience.

Cons: Whilst the surtitles were not as distracting as you might imagine, they could have been better positioned and definitely better proofread.
Minefield, Royal Court Theatre– Review

Pros: An amazingly imaginative piece of theatre. The visual aspects given to the performers’ stories make this a powerful experience. Cons: Whilst the surtitles were not as distracting as you might imagine, they could have been better positioned and definitely better proofread. ‘Have you ever been to war? Have you ever killed a man?’ half sings, half screams Lou Armour towards the end of Minefield, part of LIFT. Armour is neither actor or singer. He is a Falklands veteran. And while he sings and screams out that refrain, the band providing the music consists of four more Falklands veterans,&hellip;

An emotionally charged ninety minutes of real life experiences from real life veterans, made even more powerful by the casting of both Brits and Argentineans.

‘Have you ever been to war? Have you ever killed a man?’ half sings, half screams Lou Armour towards the end of Minefield, part of LIFT. Armour is neither actor or singer. He is a Falklands veteran. And while he sings and screams out that refrain, the band providing the music consists of four more Falklands veterans, three of whom do not even speak English. Those three were once Armour’s enemies, Argentine veterans. It is a compelling ending to one of the most emotionally powerful shows I have ever been fortunate enough to witness.

Minefield is not a play, it is a live documentary, but even that description really doesn’t do it justice. The power is in seeing and hearing the emotion of these men in the flesh. It is in the fact that we see men from both sides performing side by side, having once been sent to kill each other. During an uninterrupted and over-too-quickly ninety minutes, each tells their own story, while their colleagues help re-enact the moment. They talk about how they enrolled or were conscripted, how they ended up in the Falklands, and about their experiences during and after the war. It’s harrowing at times, hearing the quiver in a voice as one of the Argentineans describes how he could not bear to even hear English music, such was his hatred and anger after the war.

Each man performs in their own language, so we hear Spanish alongside English. The translations are shown on three LCD screens, one above the stage and one in either corner. Here is the only real issue of the night. The main display is so high up you cannot read the surtitles and watch the performance at the same time. Had it been lower, maybe at the rear of the stage, it would have sat more comfortably behind the performers and made it possible to read and view together. And the second complaint: did no-one proofread the text during rehearsals? The occasional error lets the cast down and was totally avoidable.

So far this may sound very dry, but Argentinean writer and director Lola Arias draws the stories out in such unique ways that at no time does it lag. The direction is imaginative. The cast move cameras around, allowing the plain white backdrop that dominates the stage to come to life. Sometimes their faces are shown close up, at other times there are photos and images relating to their stories. On one occasion, a whole scene is recreated with toy soldiers as one of the cast describes how his colleagues were killed by a landmine. It is the simplicity and the childlike recreation that makes this so hard-hitting.

Music, their common language, is interspersed throughout. Seeing these 50-somethings perform this way after hearing their harrowing tales is a welcome relief. At the same time, however, it is just as emotional to see the men bonding together after all the horrors they faced. And it is the music that gives us that final moment of Armour screaming ‘Have you ever been to war?’, a simple line that is filled with such meaning after witnessing the performance.

Minefield never tries to justify the war, never tries to answer who was right or wrong. War might be its common thread, the one thing that ties these six people together, but it is not a story about war. Instead it examines the men who, for their various reasons, found themselves there, whether they wished to be or not. And it is in seeing these real veterans speak that makes Minefield so powerful and such essential viewing for anyone who wishes to see human emotion laid bare.