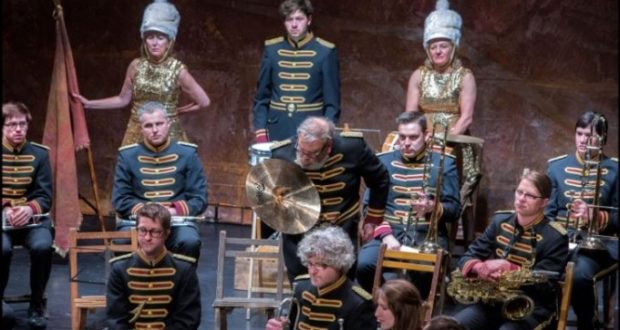 Pros: The live music of The Heroes Band is absolutely delightful. Cons: There’s a lot to digest in this hundred-minute single act. All the way from the Belgian city of Gent, in Flanders, En Avant, Marche! touches base at Sadler’s Wells for the London International Festival of Theatre 2016. Already presented at the Edinburgh Festival Fringe in 2015 – where it was warmly received by the critics – this show run as part of LIFT for two days only. At the entrance of the theatre, the promotional poster promises ‘a life-affirming celebration of music theatre, marching bands and mortality’,&hellip;

A melting pot of performing arts which, at times, can be tricky to follow.

User Rating: Be the first one !
All the way from the Belgian city of Gent, in Flanders, En Avant, Marche! touches base at Sadler’s Wells for the London International Festival of Theatre 2016. Already presented at the Edinburgh Festival Fringe in 2015 – where it was warmly received by the critics – this show run as part of LIFT for two days only.

At the entrance of the theatre, the promotional poster promises ‘a life-affirming celebration of music theatre, marching bands and mortality’, but when the lights went down, it took me a while to immerse myself in the action and understand what was going on. The first half an hour is a slow-drip of gestures, noises, steps and long moments of quiet, before the 28-strong Heroes Band joins the cast on stage. I must admit that their live music filled the air with relief, offering a repertoire that spanned from Mahler and Verdi to Balkan folk.

The set – designed by Luc Goedertier – is a ceiling-high, rust-coloured panel with cut-out windows from which the performers appear unexpectedly to great comic effect. The presence of props is limited to foldable wooden chairs and music stands. The work of lighting designer Carlo Bourguignon is crucial in the closing scene where, on a set gradually fading to black, the last gleam belongs to the flaming brasses.

Wim Opbrouck is the undisputed star of the evening. Every aspect of the 47-year old actor’s facial, corporal and performative expressivity provokes a variety of reactions in the public. Immersed in an eerie silence, the auditorium feels cast under his spell and everyone holds back the applause for fear of missing the slightest detail. Opbrouck breaks what seems to be an endless silence speaking in Italian, French, English, Flemish, German and Spanish. His accent is always impeccable, his gestures, his voice, the way he walks on stage and even his heavy breathing during the pauses are full of meaning. Only Hendrik Lebon manages to steal the spotlight with his solo dance routine, alternating funny numbers with a serious demonstration of physical strength – think of Maddie Ziegler’s frantic moves in Sia’s Chandelier music video.

En Avant, Marche! is a well-constructed specimen of experimental theatre. In the best anti-conventional and anti-hierarchical tradition, the whole cast shares responsibilities in the creation of a multi-layered composition of different performing arts. The use of words is limited and fragmented. Bits of poems, laments, a cappella songs and conversations bind together in a collage of overlapping topics and idioms, which isn’t always easy to follow. Despite being able to understand four of the six languages used, sometimes I struggled to keep the pace and I reckon it would be an even harder task for the average mono-lingual spectator. Sitting in the modern auditorium of the Sadler’s Wells theatre, you shouldn’t expect a light-hearted, easily enjoyable show, written for the general public but, instead, you should savour it as a complex blend of flavours and appreciate every sequence for its unique taste.