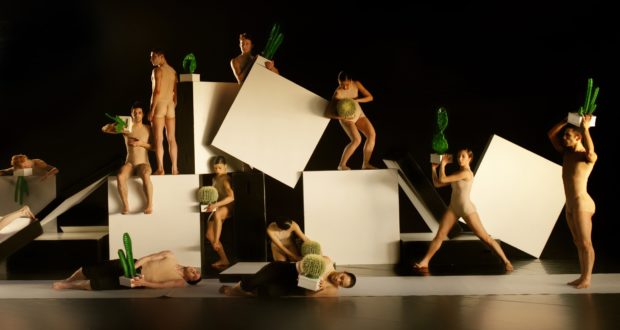 Pros: The dancers were incredibly talented and faultless.

Cons: It was a shame that all the music was pre-recorded and live musicians did not feature at all.
Nederlands Dans Theater 2, Brighton Dome (Brighton Festival) – Review

Pros: The dancers were incredibly talented and faultless. Cons: It was a shame that all the music was pre-recorded and live musicians did not feature at all. The Brighton Dome Concert Hall is a beautiful venue and the architecture at the entrance is worth taking a moment to enjoy. I wasn’t there to look at the building however, but to see Nederlands Dans Theater 2. The Concert Hall is a large auditorium but it was packed for this performance, and there was a wonderful buzz of anticipation in the room. Nederlands Dans Theater 2 is the junior division of&hellip;

This show was a wonderful mix of breathtakingly beautiful dance mixed with humour and heart.

The Brighton Dome Concert Hall is a beautiful venue and the architecture at the entrance is worth taking a moment to enjoy. I wasn’t there to look at the building however, but to see Nederlands Dans Theater 2. The Concert Hall is a large auditorium but it was packed for this performance, and there was a wonderful buzz of anticipation in the room.

The first two performances were absolutely stunning, and my highlights of the entire show. Schubert was a duet danced to the Adagio from Schubert’s String Quintet in C major and it was exquisite. The next performance was Some Other Time and again this was a beautiful performance. Raw emotions were being portrayed through the dancers’ movements and at times this dance moved me to tears, something I had not expected.

The next two dances were much more lively and jagged, I was amazed at the ways in which the dancers could control their movements. Their strength and stamina was impressive. In Solo, three male dancers danced to Bach’s Partita No 1 in D minor for solo violin. As a violinist myself, I was intrigued to see how anyone could dance to this piece. The programme notes stated that the rate of movement is so high and the timing is so extraordinary that this dance can only be performed by dancers taking it in turns and it is easy to see why! I wasn’t as moved by this performance, however again the sheer talent was phenomenal to witness. I did think that it would have been even more impressive had they had a violinist at the side of the stage performing live rather than using a recording.

The final dance of the show, Cacti, was an impressive ensemble piece. I was glad that I had bought a programme, as I was able to take something more from this piece than I would have without any prior information. The dance was created to challenge audiences to reflect on the way art is perceived. At first this was not obvious, but gradually the dance started to disintegrate and the dancers started to satirise the very art they were creating. A voice-over was also a wonderful addition and the auditorium was soon laughing at what would usually be considered in a thoughtful, and perhaps pretentious, way.

A highlight for me was a dance between a man and a woman which featured a voice-over of their own thoughts, or perhaps rehearsal conversations with each other. They were talking through the moves and making fun of the dance they were performing. This lightness and humour was an unexpected addition to contemporary dance and something I think many contemporary artists could learn from.